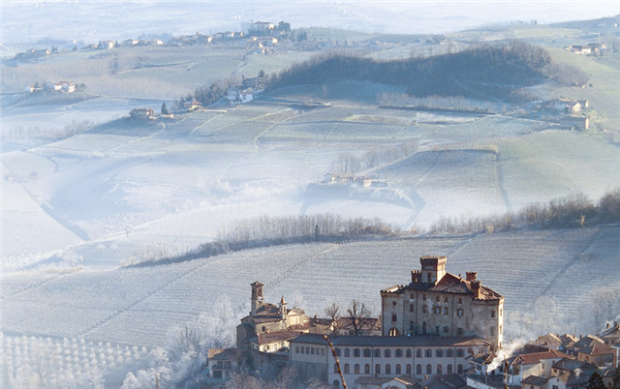 A Spoonful of Barolo

Whenever anyone mentions Barolo in Piedmont (Piemonte), I have this wonderful image of miles of ox-drawn carts loaded up with barrels of wine, being driven slowly through a 19th century picturesque Langhe landscape.

So goes the story that in the mid 1800s the widowed Marchesa Falletti of Barolo, along with her neighbour and friend Camillo Benso di Cavour, decided to bring in new wine-making techniques from France in order to transform and improve the quality and output of their vineyards. Barolo before this time had basically only been producing a sweetish wine, but the resulting new superior ‘Barolo’ wine was proudly sent off in casks (supposedly about 350) to King Carlo Alberto in Turin as a gift from the Marchesa – an excellent marketing strategy – and he, in turn, gave his royal approval. Thus began Barolo’s climb to fame to becoming one of the finest wines in the world! 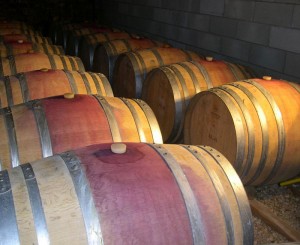 The ‘nebbiolo’ grape from which Barolo is produced has been grown in Piemonte for hundreds of years – maybe even as much as 2,000 years! It’s difficult to put a clear date to it – and it’s probably named after the ‘nebbia’ or fog characteristic of the Tanaro river valley in the Langhe. But you can also see a slight ‘misty’ bloom on the hanging bunches of grapes which could also have inspired the name. 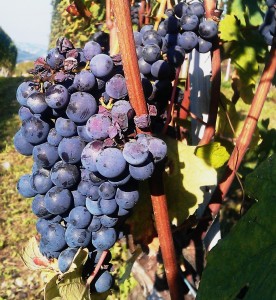 The town of Barolo lies lower in the valley than its higher ‘castled’ neighbours Grinzane Cavour or Serralunga d’Alba. As you arrive by winding roads blanketed in vineyards you’re virtually looking down into the town rather than looking up in awe at it, which is perhaps why it seems almost unprepossessing on first acquaintance. But appearances can be deceiving…although Barolo is quite small and compact it’s full of history and dominated by the elegant Castello Falletti – which now houses WIMU, the wine museum. 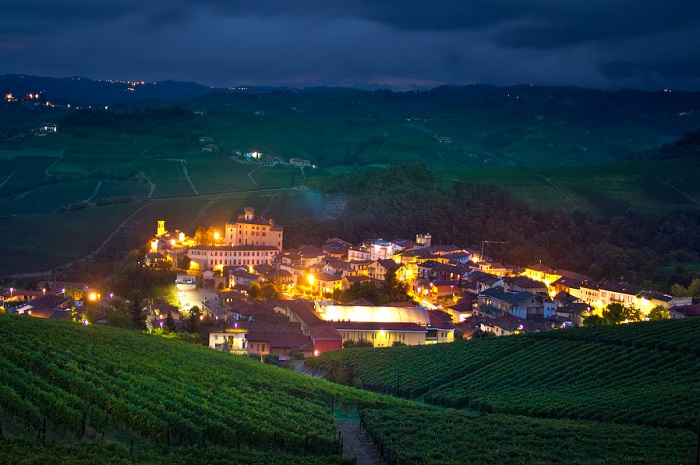 When I first arrived in Piedmont about ten years ago I was determined to try my first glass of Barolo wine in the town of Barolo itself. And I finally picked the date. But, still a novice in Italy, I was unaware of the precision of closing times and arrived at the wrong time and wrong day. Everywhere was ‘chiuso’ or closed.

So it was in a small – and perhaps suitably simple bar that I tasted my first Barolo. As it happened it couldn’t have mattered less because it’s the wine that transports you, not the bar you drink it in. They say that, as it ages, a good Barolo should have hints of truffle, tobacco, earth, roses, tea and spices and I would say that I was tasting a good Barolo that day as I could almost pick out all those different elements – even to my untrained palate. 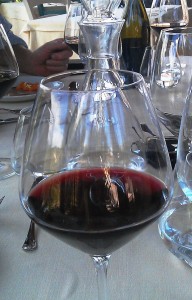 Of course I’ve been back to Barolo a few more times since then and have even managed to pick the right times and days when restaurants were open. What I still haven’t managed to get right is the amount to eat! The starters in one of the particular restaurants I chose were all superb but they just kept coming – a bit like that convoy of barrels all over again! – so that I had no room for anything else.

The maitre d’ was very understanding but also disappointed – as indeed I was, because of course the other Barolo dish I wanted to try was ‘risotto al Barolo’…..and, following that, I could have had ‘brasato di cinghiale al Barolo’…but no, I was ‘piena’, totally full! Because I was eating with my other half, we managed to come to a small compromise whereby he ate the risotto and I just had a spoonful or two to try. But it was enough to know that it was fabulous – smooth and rich, cooked ‘a puntino’ as they say….to perfection.

We can’t finish this spoonful journey of Barolo without a Risotto al Barolo recipe. I don’t know whether this recipe can do that particular Barolo risotto justice but I guarantee it will still taste delicious so give it a try!

300g risotto rice (I use arborio or carnaroli)

Heat the butter in a high-sided saucepan over a medium heat.

Add the chopped onion and sauté until soft, not brown.

Add the rice, stirring well to make sure every grain is coated with butter.

Slowly pour in the wine and stir until it has all evaporated.

Then slowly add the hot stock, ladle by ladle, stirring occasionally (should take about 15-20 minutes)

Just at the end of cooking, stir in the parmesan cheese, the other 15g butter and season with salt.

Put the lid half on the pan and allow to sit for 5 minutes before serving.

Faustina is English and now lives in Italy. Faustina moved to Italy to be with her partner, Fiorenzo, and they have a Feldenkrais, Floating and Food Therapy Centre: www.spaziof.org . She continues her love of food and research by exploring all the wonderful places and products here in Northern Italy; She is a member of Slow Food Italia and teaches seminars on healthy eating and juicing, as well as writing her food/health blog www.eatingcloudsinitaly.com