Step Into the World of this Iconic Brand from Turin

Martini & Rossi has always been loved and known all over the world but some may not know that it originated from Turin. It’s an important brand rich in history, character and curiosities. For vermouth lovers and curiosity addicts, it will be a delightful surprise to discover that the Casa Martini Wine Museum are just 35 minutes by car and 20 minutes by train from Turin (which can be a great day trip from Turin).

The route inside the Casa Martini Museum aims to tell the overall story of wine and the birth of classic Vermouth, thus leading guests to enter the Martini world to discover over 150 years of its history! But how did Martini & Rossi become so popular and part of a chic drink culture? Let’s step back and trace the history of such an iconic brand… 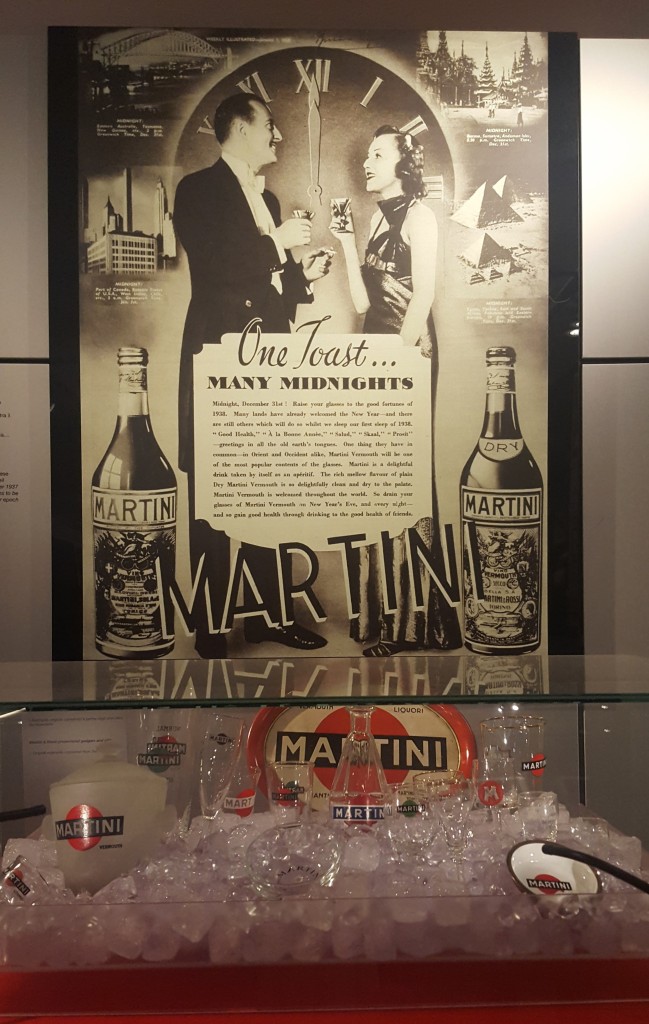 The Martini & Rossi historical distillery and museum is located in Pessione of Chieri (not far from Turin’s city center) and all the workers were from this small Piedmontese town. Martini also used to have a location in Turin’s city center.

The company has always been characterized by strong global expansion since the 1800’s and achieved success in the US market during this period as well. In fact, Martini & Rossi had three foreign branches before the 1900’s in: Buenos Aires, Geneva and Barcelona. Despite this, the Pessione factory (the historic heart of production since 1864) is still a major milestone for the company. Here, you’ll find the Group’s most important production center throughout Europe, one of the Martini’s Terraces and the Museum living in harmony. The decision to have such an important location point near Turin was strategic at the time, to take advantage of access to the world of the Astigian hills for commodities as well as to quickly arrive all over the world thanks to the port of Genoa, conveniently connected to the city of Turin.

Vermouth, From the Cradle to Worldwide Success

Historically, from a geographic point of view, the cradle of vermouth was in the Italian region of Piemonte and the French Savoy regions which, in the 18th Century, consisted of  the mainland territory of the Kingdom of Sardinia. 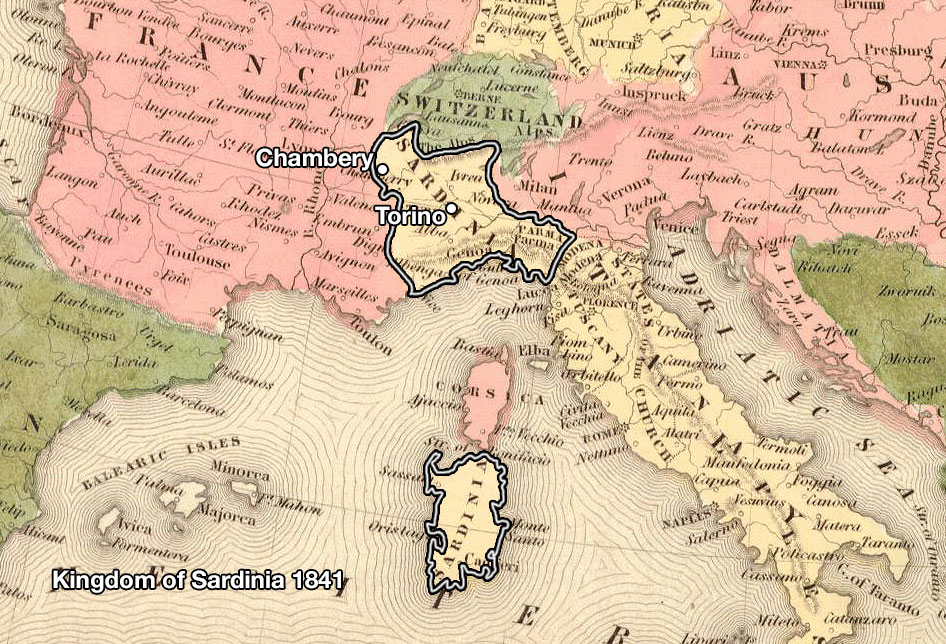 As a brand, Martini & Rossi has not always been called Martini & Rossi as we know it today. And, perhaps, not everybody knows that the very first headquarters of the company was in Contrada San Filippo in Turin with a factory in Asti. At that time, the company name was “Distilleria Nazionale di Spirito di Vino” – who would have thought the name would change so much over the years… 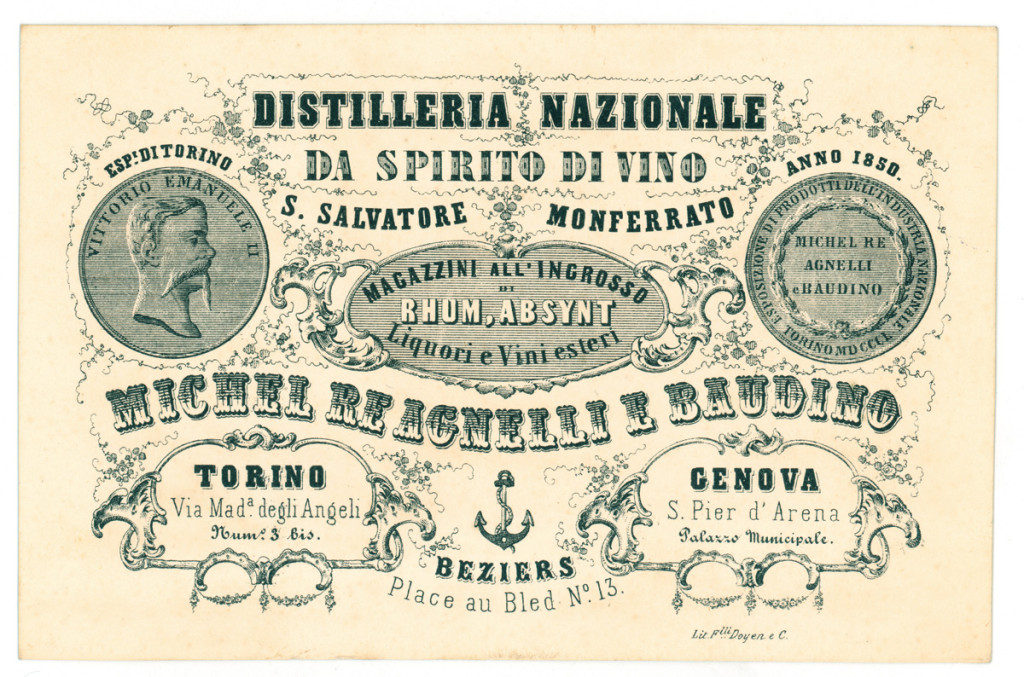 Initially, the company’s business partners were Teofilo Sola, an accountant, Alessandro Martini, a salesman and Luigi Rossi, a creative herbalist and liquor expert. After the death of Sola in 1879, the company took the historical name of Martini & Rossi, although it had long gone with “Martini, Sola e C.ia Successors”. As Martini & Rossi became a world-renowned and enduring brand, the logo remained as it was although Alessandro Martini died in 1905. And the company was carried on by Rossi’s successors. Today, since 1993, Martini & Rossi is part of the Bacardi Group, the third largest producer of alcoholic beverages in the world. 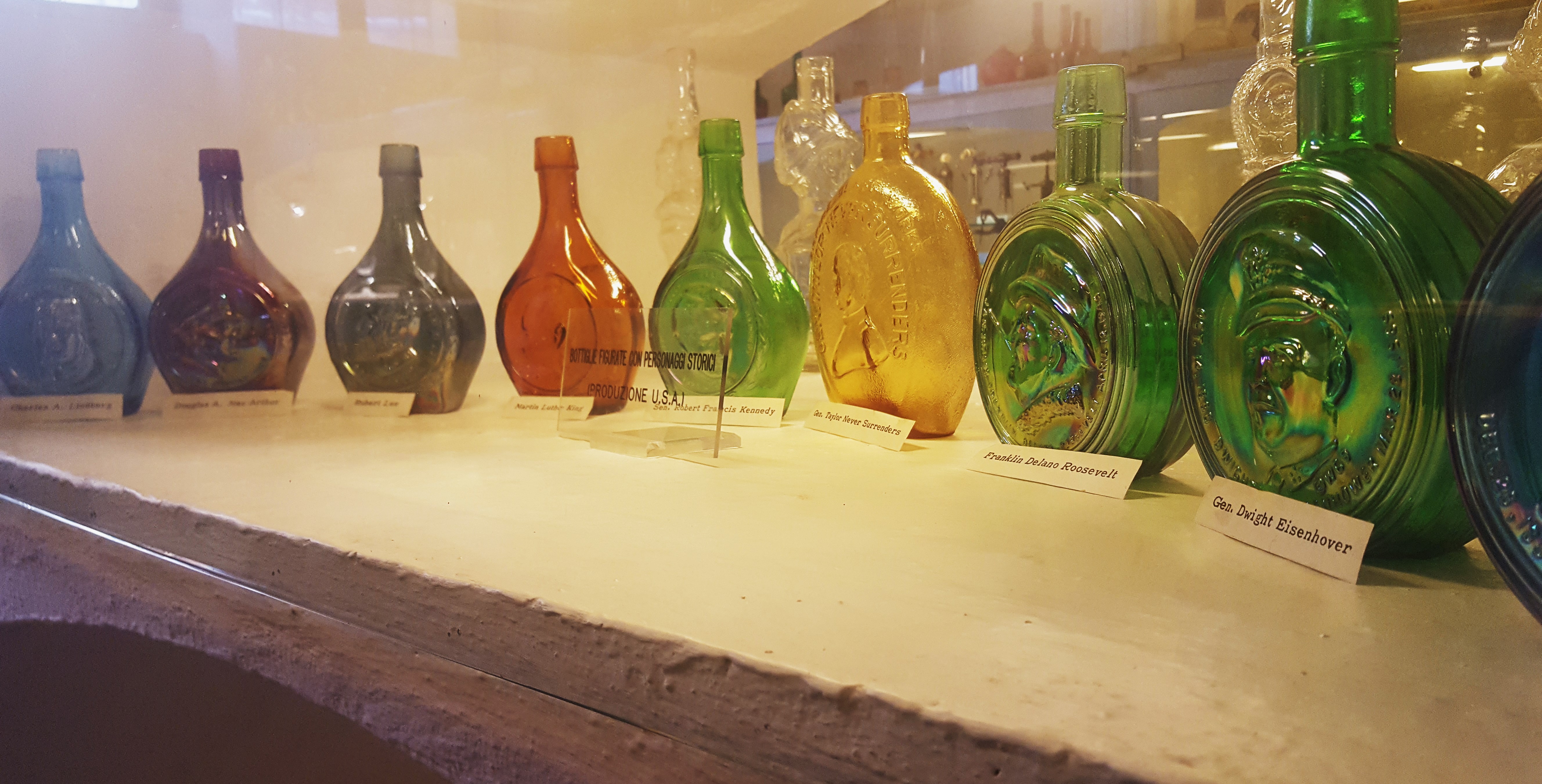 Martini & Rossi owe the reputation of its Vermouth to the ingenious recipe of Mr. Luigi Rossi, a Master herbalist and liquorist. Vermouth, a word that in German means “wormwood” (a woody shrub with a bitter aromatic taste used in both Vermouth and Absinthe) derived from early German and Hungarian wormwood-infused wines. Wormwood remains Vermouth’s principal botanical but also calls for other basic herbs and spices. Rossi selected 43 in total for his secret recipe. Every type of Martini uses about 30 different botanicals and essences whose doses are only known by three people in the company. The secret recipe is kept in a Swiss bank and is said to be known only by the President, the Master Bleb (responsible for the collection of spices, which are different each year) and the Alchemist (responsible for the calculation of the recipe on the basis of quality, year of production and other factors of the spices found).

In the Casa Martini Museum you can see particular scales without any information on hand. In fact, only those who knew the recipe could measure the essences and other workers in the factory did not have to know about some particulars. Each spice within the 43 botanicals used is selected according to its properties and treated differently, from diving into alcohol to filtration. Some of the spices can be seen in the museum like: 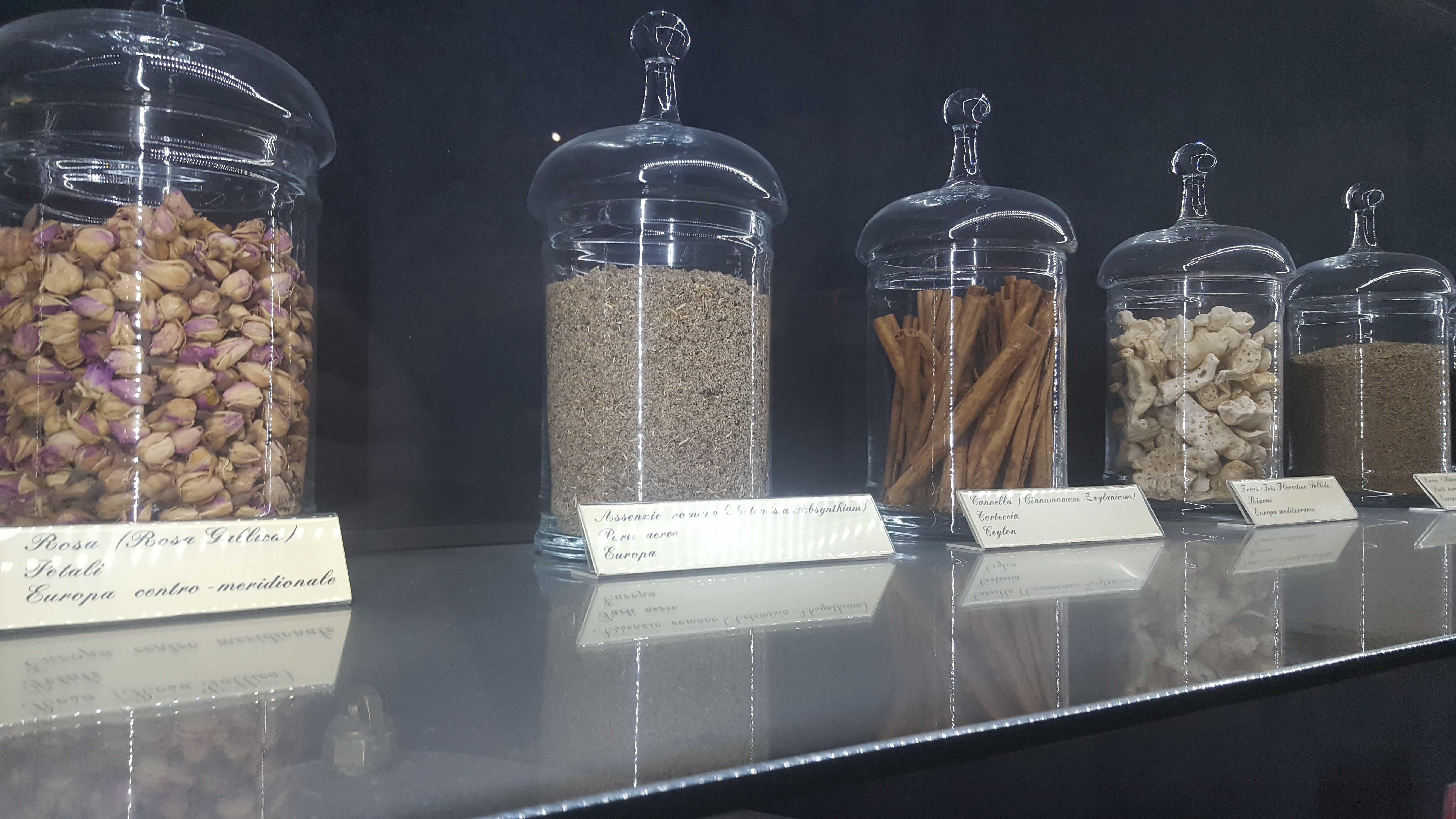 History Of An Enterprise Always On Top

In the Casa Martini Museum, there’s a gallery dedicated to the Martini & Rossi brand where you can discover the history of a company that has been constantly renewed over time and has inspired art, sports and fashion. The importance of Casa Martini was already known in the 19th Century, when the international excellence guarantees were given to Martini & Rossi products. Among the prizes won were those of international exhibitions and the recognition from the Savoy’s as the “providers for the Royal home”. All these achievements were portrayed on the Martini label through the symbols of fame and victory.

With the evolution of Martini’s product range, world-wide expansion and the social importance of the brand, advertising campaigns have increasingly become elaborate and memorable. In the Pessione Gallery at the Casa Martini Museum, there are historical and the most fascinating Martini fixtures. Visitors will find Jean Droit’s Orange and The White Lady by Dudovich, as well as the most important American marketing campaigns that have involved high-profile artists like Andy Warhol.

Dudovich’s White Lady: Marks the birth of the White Martini. Elegant, delicate & floral with vanilla perfume; ideal for ladies’ first time at the bar in the 1920s

With the help of television, Martini & Rossi reached even more popularity in the 1960’s with its first commercials. To date, there are a lot of Martini’s well-known commercials in the world from the black and white advertisements to the “No Martini, No Party” ads. The brand reached even more fame being cited by excellent writers like Hemingway and Capote and loved by characters such as James Bond and his famous quote: “Vodka Martini, shaken, not stirred”.

And let’s not forget to mention the Martini Terraces (like the one in Milan) which are still a place to enjoy a cocktail in luxury and style. Fellini even chose this location for his “La Dolce Vita” film premiere!

“Martini is more than a cocktail,

Since 1925, Martin & Rossi has sponsored a vast array of sports events and manifestations. The first ones were linked to the world of cycling as the “Grand Cup Martini & Rossi in Turin” and the “Tour of Italy”. The idea was to not only sponsor sport, but to bind it to some of the products of Casa Martini. For example, the Elixir of China became known as an excellent digestive that “Keeps you healthy as a fish”. And among the earliest testimonials there were, Gino Bartali, Learco Guerra and Tezio Nuvolari said, “I owe my energy to the daily use of the exquisite and healthy Elixir of China Martini.” This is how Martini and sports became one, and not just in the world of cycling, but also in Formula One, fencing, golf, tennis, horse racing and sailing. 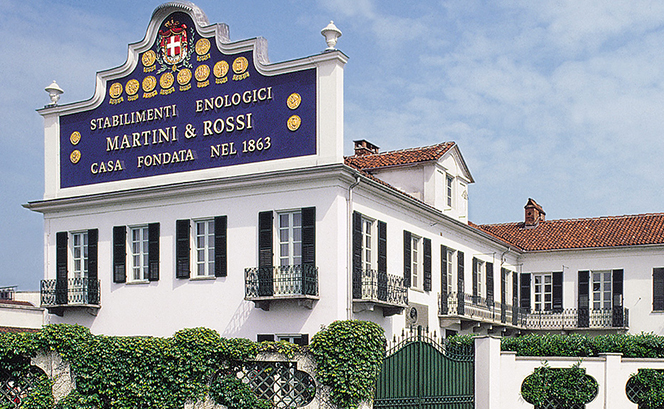 In the first part of the Casa Martini Wine Museum in Pessione, there are collections of ancient findings of every era related to wine production. The museum rooms are divided into different themes and eras, and they display pots, goblets and machinery for the production of wine of Greek, Roman and medieval periods from around the world.

Among the rooms that precede the Martini Gallery, in addition to ancient finds, there are wagons and Zhar silverware, a room dedicated to the original production of Red Vermouth and a fragrant reproduction of a cellar where the remaining bottles of the private collection of Luigi Rossi impregnate the walls with their fragrances from vanilla of the White Martini to the tones of Rosé and China. The aroma of fragrances will carry you through to the Martini Gallery and a majestic door which leads to the Mixology Class. 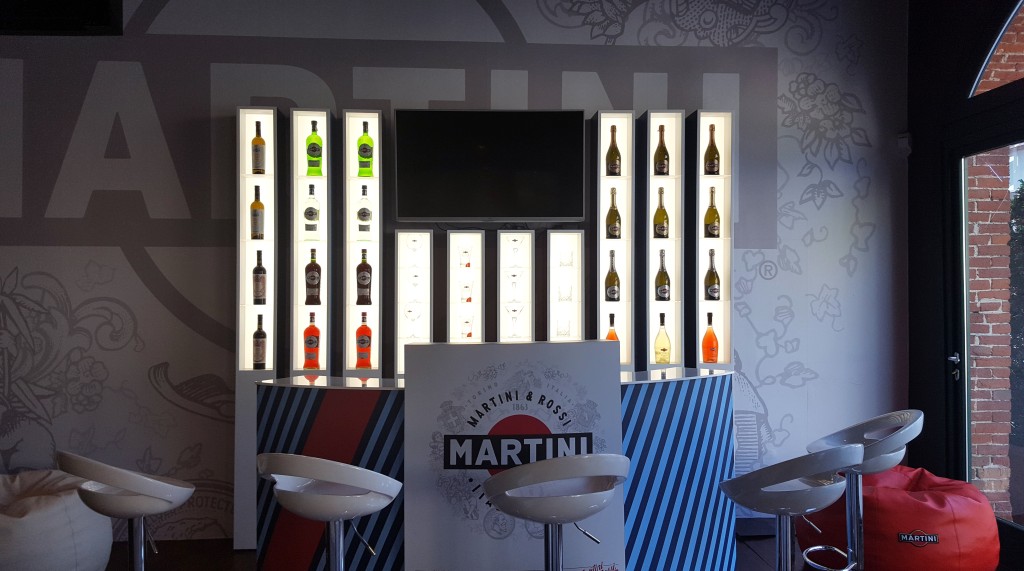 The Mixology Class is one of the experiences proposed by Casa Martini. By participating in this one-hour course, you will learn so many curiosities about the Martini world and the unique alcoholic drink.

The professional bartender will welcome you in the classroom, showing you how to prepare some of the most popular cocktails with Martini of various types. At your disposal are the right glasses, White Martini, Red or Rosé, citrus to decorate and perfume the cocktails and non-alcoholic mixers to blend everything! 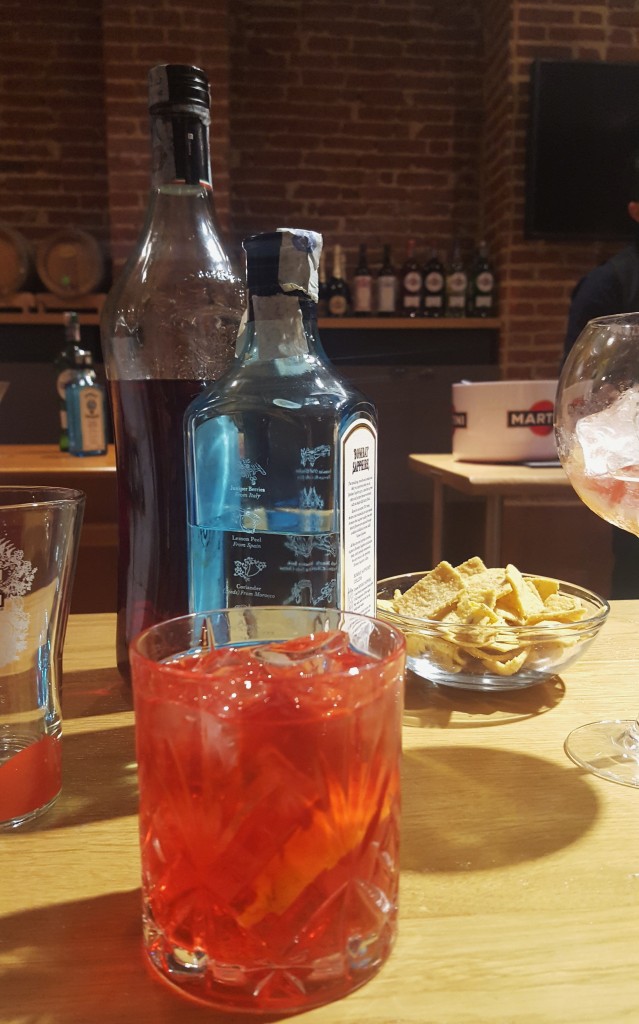 In this environment, rich in perfume and history between the stone walls and the typical setting of a cellar, you will discover all the secrets of the Americano, Mi-To and Negroni Sbagliato cocktail (Wrong Negroni in English).  Time flies by as you learn how to mix these iconic drinks and become part of such a historical brand. A trip to Casa Martini and experiencing the tour is definitely worth it during your time in Turin or whilst visiting other areas in Piedmont!

How to Book the Casa Martini Tour

Day Trip From Turin: How to get to Casa Martini in Pessione from Turin 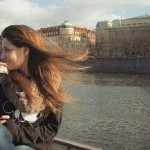 About the Writer: Virginia is a young University student in Turin and a curiosity lover. She lives to write with wonder about the marvelous little things that she sees in this world.