Deborah was born in England and has been living in Turin with her family for 10 years. Unlike the stereotypical brooding artists, Deborah is bright and welcoming. Her vivacious and sunny personality can definitely be seen in her colourful and expressive contemporary artwork.

Deborah, in her words…

When did you become an artist? I always drew as a child, even before I could walk. At 2 and half years old, I was able to draw an elephant; I still have this drawing amongst all of the others my mother kept for me.

Art education in England is really important starting at an early age. My friend and I were always chosen to draw things for school productions. My father is a ceramicist and did that as a hobby…he drew as well. My parents always supported my pursuit and love for art.

Straight way from high school, I began studying art. For some reason, I always knew I would study art…I eventually went to Leeds to pursue a Fine Arts degree and later went on to study in Cyprus at the Cyprus School of Art under the watchful, inspirational eye of Stass Paracos and British painters Jennifer Harding and Geoff Rigden.

Art Psychotherapy interests me so, after my time in Greece, I came back to England and worked with psychiatric patients and prisoners, which was very rewarding.

Deborah goes on to explain that she also completed a postgraduate teaching degree in Art and Design and studied experiential postgraduate training in Art Therapy in England. Deborah’s research in Jungian Analysis and Art Psychotherapy has inspired her painting to explore the unconscious mind of creativity. She is very interested in the juxtaposition and opposing forces of planned spontaneity and ordered chaos (which can be seen in her collaged pieces).

In what period in time would you have liked to live as an artist? The late 1970’s and 1980’s…the Studio 54 scene in New York City…Debbie Harry, early Madonna, dancing all night with Warhol, Basquiat and Haring.

Which artists have influenced you? American artist – Jean-Michel Basquiat, he started as a DJ and graffiti artist. Contemporary street artists working now, mainly for the visual element, because of the colours, graphic and illustrative style. Antoni Tàpies from Barcelona and British artist – Bridget Riley, not so much for the work itself but also for the ideas and theory behind it.

For these reasons I am also always very in awe of our most famous British sculptor Anthony Gormley! I have heard him talk a number of times; he is mesmorising and projects the same kind of zen and calm you can feel close to his sculptures.

Sometimes, I don’t necessarily love the work of the artist, I like their thought process behind it.

How would you describe your artwork?  In the past, Abstract Expressionist, but it has evolved with new techniques…with collage, deconstruction and reconstruction. For example in my collages, I like to work on two elements: pure chaotic spontaneity and then reordering it into a more formal systematic grid work.

What inspires you? Everything and everybody but mainly people. I can speak to people and, as I am listening to their stories about their lives, thoughts or their work I have visual triggers. Images race into my mind and I think – I could create a painting from that!

Recently I was chatting to arachnologists at a conference in Turin. One studied spider’s genitalia and he told me how symmetrical and amazing the forms were under a microscope. The other explained how scorpions have absorbed so much UV as a species that they can glow under a UV light. Now that’s inspirational! Watch this space!

What advice can you give aspiring artists? I wish I did a little more when I was in my 20’s…so I would say to do as much as you can when you are young, practice your craft and study. Paint and don’t care what people think. In your 20’s you are more free, when you get older you start thinking and rethinking and sometimes overanalysing each mark that you make. 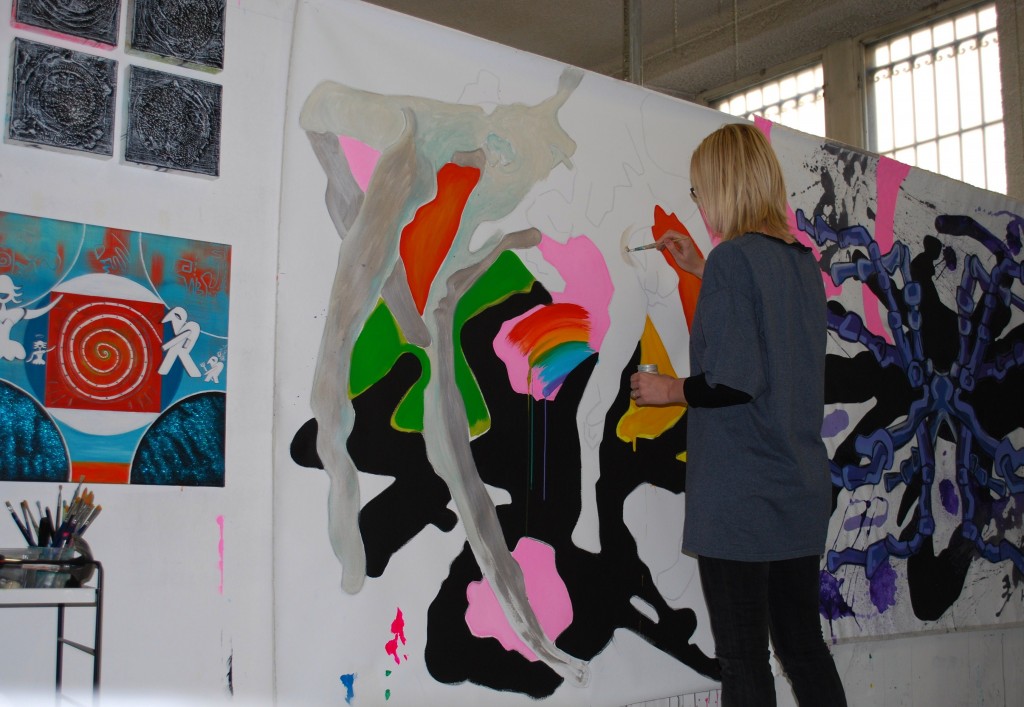 “To talk about painting is not only difficult but perhaps pointless too. You can only express in words what words are capable of expressing, what language can communicate. Painting has nothing to do with that.” – Gerhard Richter

Visit Deborah’s website to find out more about her and to view more of her contemporary artwork: http://www.deborahrushton.com/