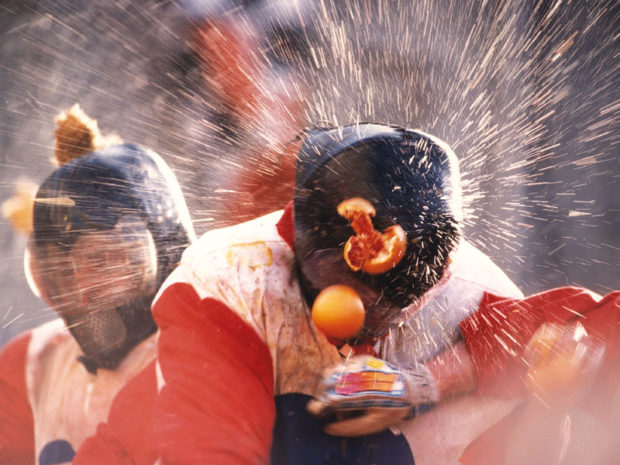 Ivrea Carnival and Battle of Oranges

Ivrea Carnival and Battle of Oranges

Italy’s historic carnival where you can join in the fight! 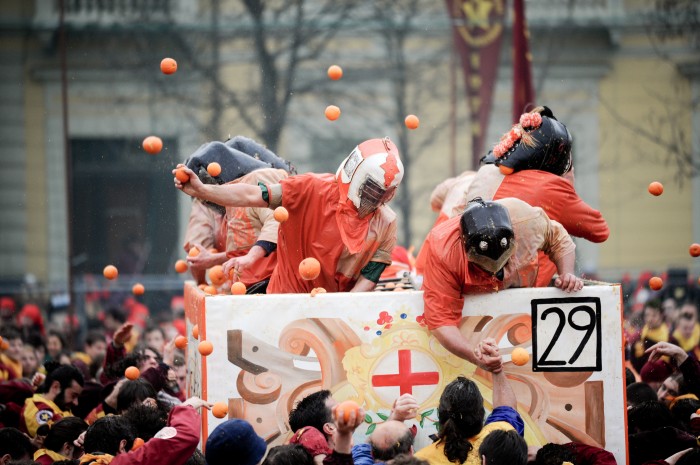 Seeped in local tradition, one of Italy’s most colourful, historic carnivals and one of the oldest in the world, first took place in Ivrea in 1808 when the city’s French administrators decided to bring together the various rowdy celebrations dotted around the city and turn them into one big carnival celebration.

Chucking oranges is the highlight and main attraction of Ivrea’s Carnival and the Battle of Oranges experience. Ivrea’s earlier battles involved beans but apparently, a surplus of citrus fruit from producers around Nice in the early nineteenth century set the stage for the ammunition of carnival battles to come. If you’re not keen on indulging in sticky orange combat, don a red Phrygian cap (it looks a bit like a Smurf’s hat) which has to be worn by anyone not wanting to get covered in peel, pith and juice or clocked on the temple by a particularly hard variety of orange. 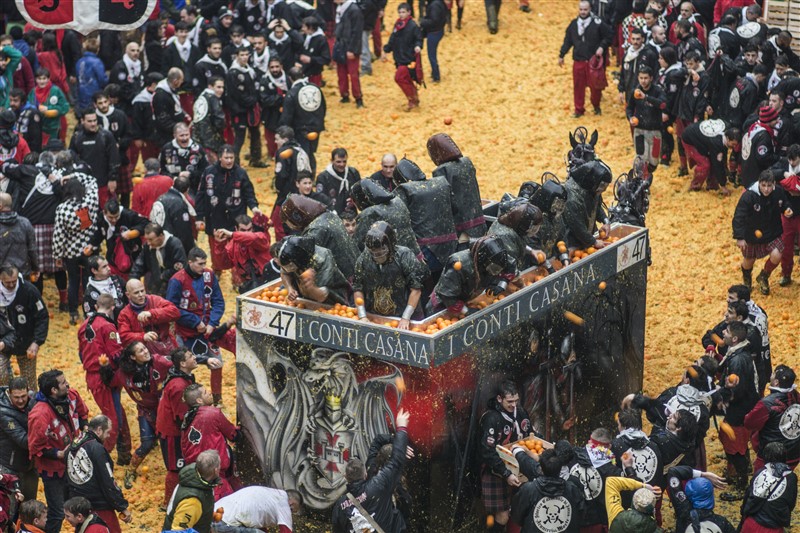 Ivrea’s Battle of Oranges: A Symbol of Rebellion

All the pomp and ceremony starts early in January when Ivrea elects the people who will represent the main characters. The story goes that in the 12th century the ruthless tyrant, Conte Ranieri di Biandrate exerted his right to jus primae noctis, which gave him the right to spend the first night with every bride the city had. The day came though when one high-spirited and brave young lady said enough is enough! Violetta, the local miller’s daughter engaged to be married to Toniotto, lopped the head off of the Conte on her wedding night. Waving the Conte’s head triumphantly from the balcony she sparked a rebellion in Ivrea that marked the end of the hated Biandrate family rule and the entire lot were expelled from the city, which was then to be governed as a free municipality.

From Beans to a Battle of Oranges

From the Middle Ages, Ivrea’s Carnival came to mark the freedom of the town from starvation and tyranny. Beans were thrown in the first years to symbolise the contempt for their opponents in battle. The evil Conte was said to have given poor families a measly pot of beans just twice a year apparently to stave off their hunger. The beans were duly thrown into the streets to show their contempt at this offensive gesture. Beans were later joined by sugared almonds, confetti and flowers and young women also started to throw oranges, with their aristocratic and exotic French associations, from their balconies to potential suitors below.

Things changed though and instead of merely throwing oranges to suitors or simply as a gentle symbol of contempt, the citrus fruits graduated into fully-fledged weapons to be used in Ivrea’s famous Battle of the Oranges. The people on foot represent the population in open revolt against the feudal lord’s army symbolised by the people parading through the streets on carts. Raucous battle commenced annually until the 1st World War when a stricter and safer protocol for Ivrea’s carnival event was firmly established. 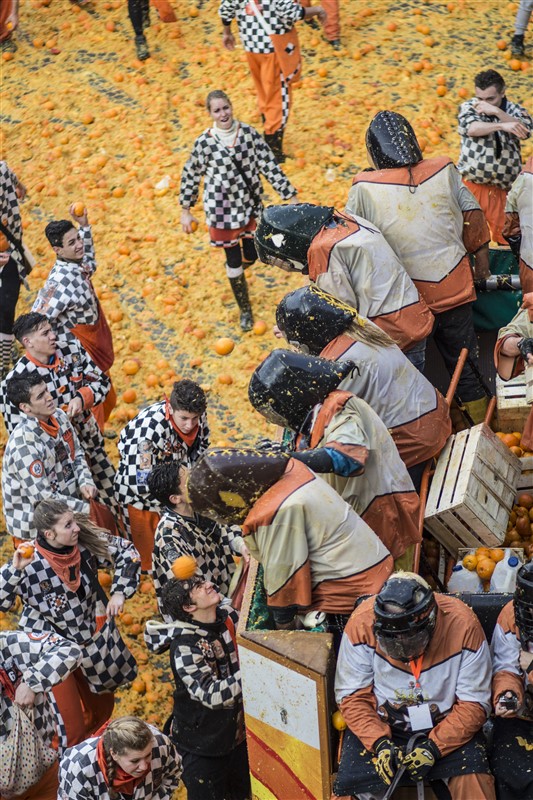 The lead up to the Battle of Oranges unfolds like this…

In January the town elects the Generale who takes on the role of master of ceremonies and assumes full power via a proclamation from the town hall balcony. Later on the same day, he travels on horseback to pay homage to the Bishop and he finally gets the party started in the evening when he opens a grand masked ball in Piazza Ottinetti. This is also the day referred to as Abbà. The Abbà are a select group of 10 children dressed in Renaissance costume and represent the 5 parishes in Ivrea. In 1700, the Abba was the head of an association called Badia. This association was frequented by young people who organised parties, and their emblem was a loaf of bread stuck on the end of a pick. These days the pick is a sword and the bread (an orange of course) to symbolise the beheaded tyrant.

On the Saturday at 9pm before the Battle of Oranges the identity of Violetta (the Mugnaia) is finally revealed by the Miller’s daughter’s escort of honour (Scorta d’ Onore della Mugnaia). She parades around the city by torchlight, accompanied by a dramatic backdrop of fireworks while fat beans (fagioli grassi), the traditional, peasant fare of choice bubble away in cauldrons. This is the most famous dish associated with the long traditional of carnival dating back to the Middle Ages. For this charity bean fest (Fagiolate Rionali), hundreds of kilos of beans are cooked together with juicy salami and pigskin to be served to the townspeople early Sunday morning. This hearty meal will line and warm hungry stomachs as fuel for when battle begins later in the afternoon. 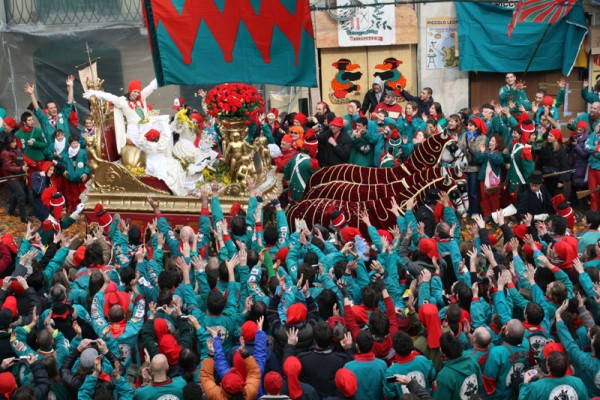 The Battle of Oranges commences on the whistle on Sunday afternoon and Ivrea is blanketed in orange. When the whistle sounds again, the orange throwing stops temporarily for battle weary participants to draw breath and prepare for the next onslaught. Non-battle fatigued participants can launch even more oranges on Monday and Tuesday in a carnevale finale that lasts 4 days and involves 9 combat teams. Safety conscious spectators can hide behind the nets that cover the buildings around the edges of the piazza but more adventurous types can dodge the oranges directly on the battlefield. You are strongly recommended to wear the red Phrygian hat if you don’t want to get a direct hit. You have been warned! 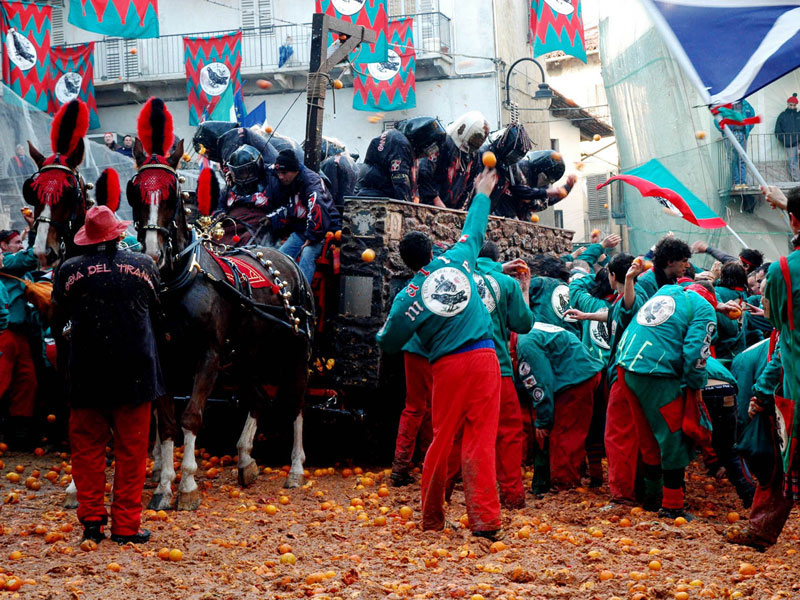 Battle participants who also double up as avid foodies will be pleased to know though that the end of Ivrea’s carnival celebrations are marked with a tasty meal – polenta and cod (polenta e merluzzo). Thousands of portions of the polenta, served soft and made with maize flour are dished up along with the salted cod and a hefty portion of thinly sliced onions, on Ash Wednesday to coincide with the first day of Lent in Piazza Lamamora.

If you’re courageous enough to take part in Ivrea’s Carnival and Battle of Oranges let us know on Facebook or Twitter. We’d love to see your photos and hear about any of your carnival stories.

Visit Ivrea’s Carnival and Battle of Oranges for further information