The weather is warming up and more and more fruits are coming into season now. If you’re looking for a new way to show off some freshly picked berries at dinnertime, why not serve them with panna cotta Piedmont style?

This sublime dolce al cucchiaio (literally, ‘spoon dessert’ in Italian)is a perennial favourite on dessert menus in restaurants all around the world. Given the clear fondness of many chefs for preparing it, one would assume that making these delectable moulds is laborious and best left to the professionals. However, as I found out in my past month of experimenting, preparing it at home is surprisingly easy.

The origins of this dessert are shrouded in mystery. Many secondary sources cite the legend of a Hungarian woman who brought a panna cotta-like recipe over to the Langhe area of Piedmont in the early 1900s. Cattle and cream abound in this part of Italy and her recipe was therefore readily adopted in the region. Others argue that it is a local adaptation of other similar continental puddings such as the Sicilian biancomangiare (traditionally made with almond milk) and the French crème bavaroise.

Traditionally, panna cotta Piedmont style was prepared by simmering cream and sugar with fish bones. These days, however, gelatin is almost always used as the setting agent. Vegetarians and others who are not keen on using gelatin may wish to use agar agar or egg whites to set their little moulds instead. If using the latter though, an extra step is involved, as the moulds need to be cooked bain marie style (like a crème caramel or a bonet) before being left to cool and set in the refrigerator.

Contemporary panna cotta Piedmont style recipes, moreover, are testimony to the versatility of this dessert. For example, some opt for a lighter version by replacing half the quantity of cream with milk. I love yoghurt and so I’m naturally quite fond of a variant I came across recently which calls for half cream and half yoghurt.

The cream can also be infused with a variety of aromas such as vanilla, mint and coffee among many others. Garnishes vary too. Caramel and chocolate sauces, liqueurs, fruit coulises and fresh berries are just some of the many condiments that may grace your plate of panna cotta. Given all these possibilities, it is not at all hard to see why this delightfully wobbly panna cotta pudding is often described as a chef’s dream. 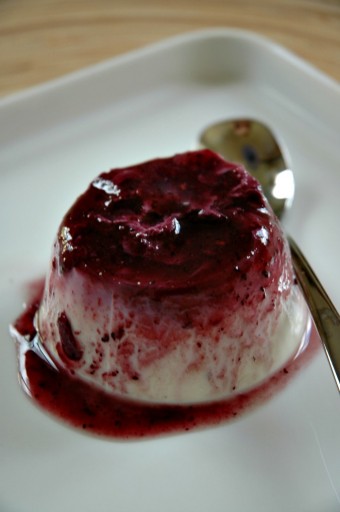 Here is my recipe for making panna cotta Piedmont style: