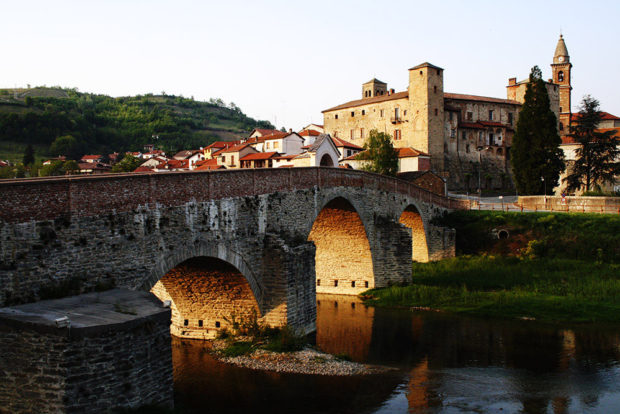 Piedmont Off the Beaten Track

Piedmont Off the Beaten Track

The Medieval Villages of Monferrato Acquese

Many travellers are opting to experience Piedmont off the beaten track. They’re looking for a deeper travel experience where they can escape their busy lives and get immersed in the local culture. One such travel experience recommended by local expats, Natascha and Nicolas, is this self-drive tour through the small medieval villages of Monferrato Acquese with its panoramic hills and calanche (prehistoric dunes). 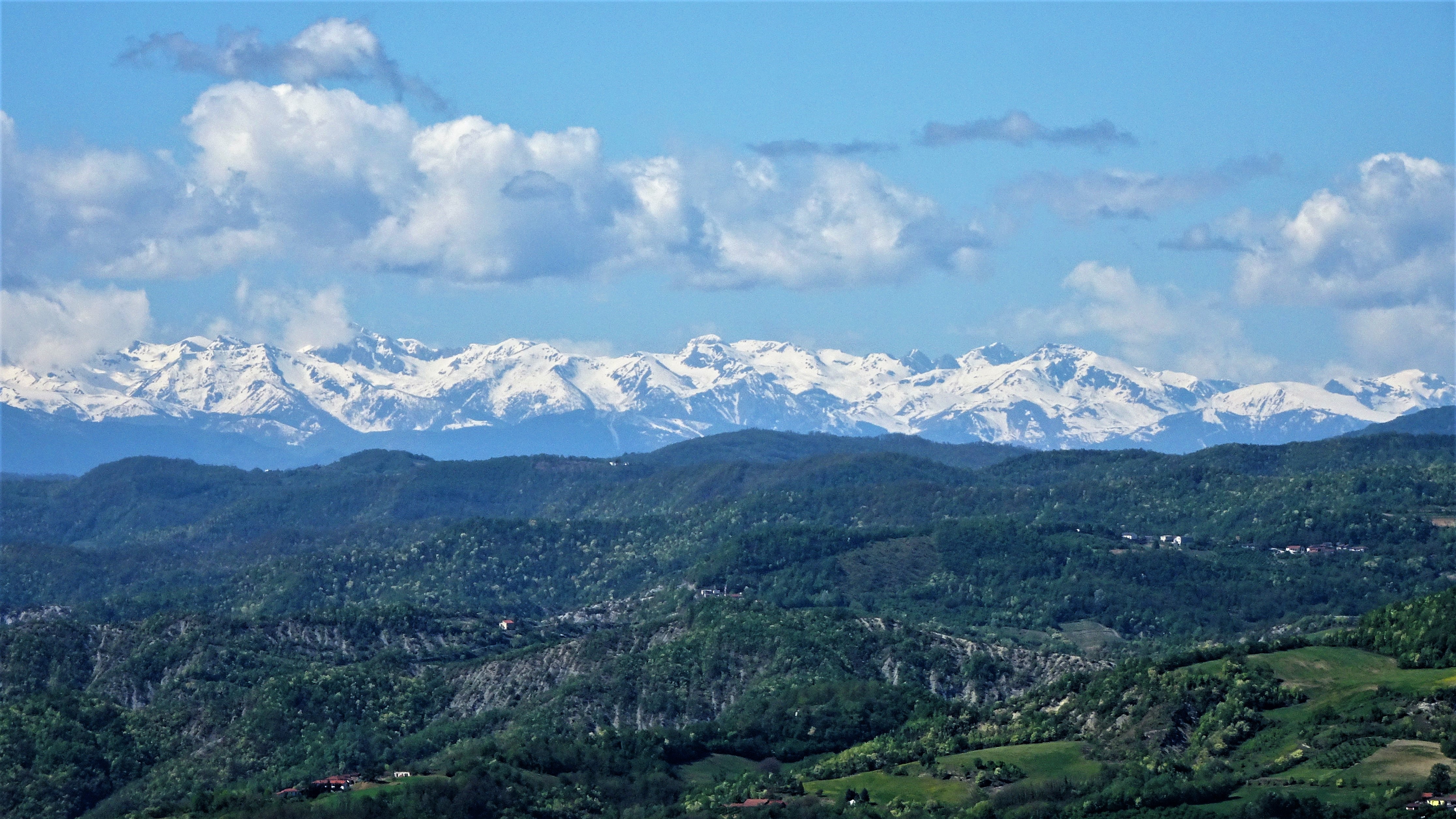 The Medieval Villages of Monferrato Acquese

Monferrato Acquese is located in the southernmost part of the Piedmont region between Acqui Terme (in Piedmont) and Savona (in Liguria). To help get your bearings, refer to the map at the end of this post.

You will be amazed by the authenticity of the area…souvenir shops are hard to find, some villages barely even have a bar or grocery store and, as an international tourist, you are still clearly an attraction to the locals. On this route, you travel from Spigno Monferrato to Mombaldone, Denice, Roccaverano, Monastero Bormida, Bistagno, Terzo, Acqui Terme, Arzello, Castelletto d’Erro, Montechiaro Alto, Pareto and Merana.

The starting point is Spigno Monferrato. This village is built around a fortified castle (which was destroyed in the 17th century and of which you can now only see some remains) and the parish church of Sant’Ambrogio offering beautiful views. Northeast of the Spigno Monferrato is the medieval Ponte San Rocco (seen in the Italian movie “Il Diavolo al Pontelungo”) across the Bormida River. Note the charming chapel in the middle of the bridge. 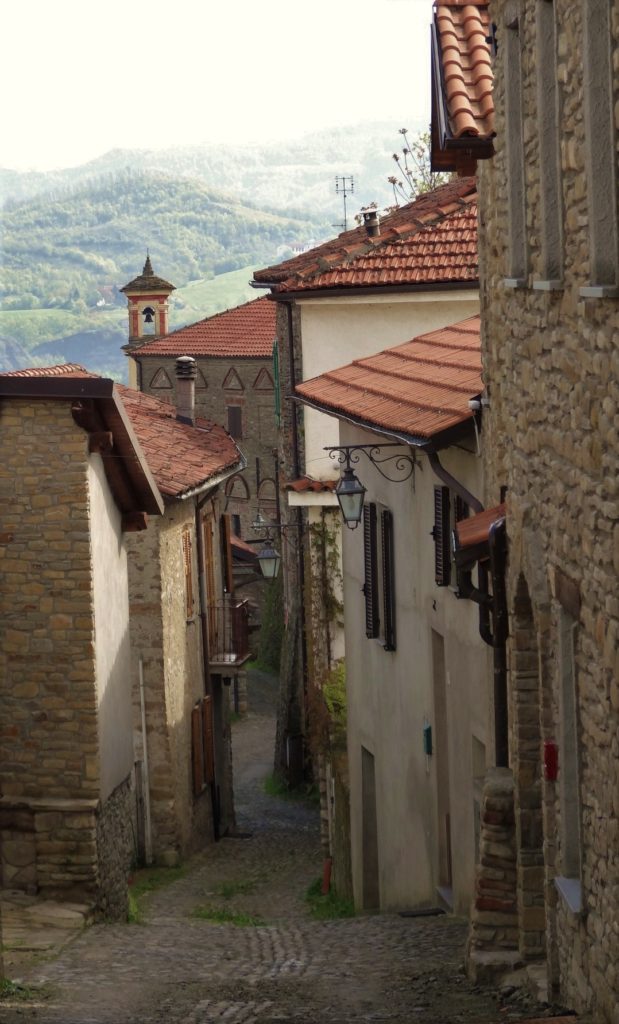 The next village, Mombaldone, is a fortified village that has preserved its medieval character. It is not a surprise that it is considered one of the hundred most beautiful villages in Italy. Even if it is tiny, you can admire many attractive houses and buildings from the Renaissance and Gothic era. Every year at the end of August a medieval party is organized, it’s definitely worth a visit.

Then drive towards Denice, a charming medieval village with characteristic stone houses around a tall bell tower dated back to the 12th century. Above the portal at Via del Circolo 6, you can see a stone inscription from the Roman era, found in the valley. The village of Denice is also a unique open-air museum of ceramic artwork displayed throughout the village, which you can see on the stone walls and can be enjoyed for free.

More information can be found on the municipality of Denice and Denice’s Museum of Contemporary Ceramics websites.

Further up the hill is Roccaverano. This village is quite isolated on a hill which divides the two Bormida valleys at an altitude of 800 meters. It is surrounded by old towers, forests, terraces and fields. On clear days the snowy Alpine peaks shine in the background. There is a cute piazza dominated by a medieval tower. Here you can find a bar, with above it Osteria Il Bramante where you can enjoy the local cuisine. Roccaverano is also home to the famous Robiola di Roccaverano DOP goat cheese so you can visit local cheese producers…a delicious experience and souvenir!

Back in the Bormida valley you arrive in Monastero Bormida, which is dominated by an imposing 14th century castle. The monastery was founded in 1050 by Benedictine Monks. Inside, you can admire mosaic floors and frescoed ceilings during the open castle days (visit the Castelli Aperti for opening times). Every March, a large polenta celebration takes place in the piazza. 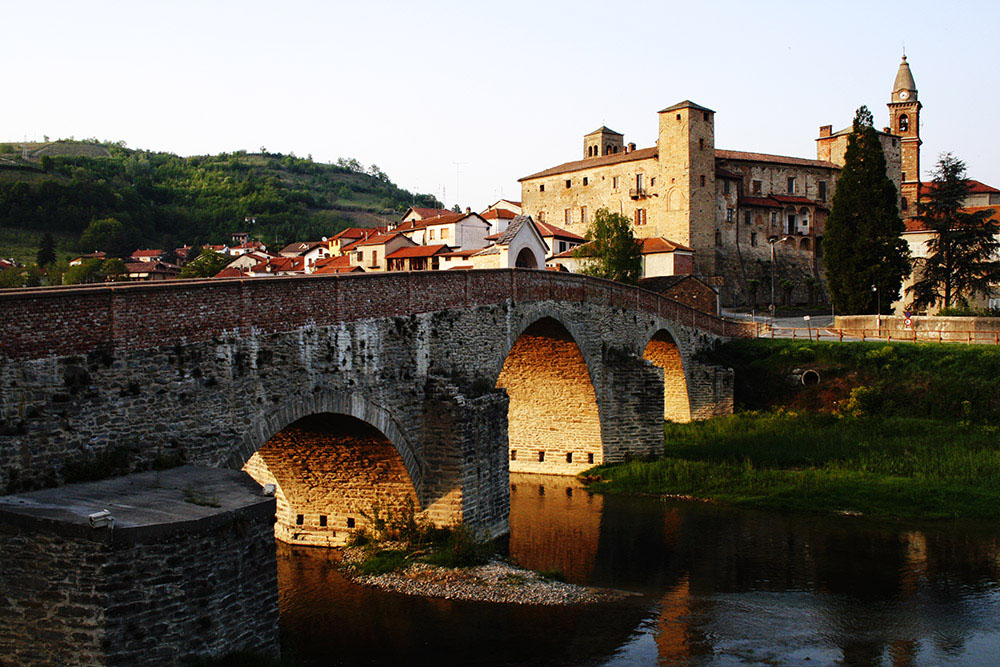 From Monastero Bormida, follow the road to Bistagno. Here the rivers Bormida di Millesimo and Bormida di Spigno converge. From the castle, only a triangular tower has been preserved which is part of a fake medieval house. The Baroque parish church of San Giovanni Batista is flanked by a Romanesque-Gothic bell tower.

Turn left for Terzo, further down the road towards Acqui Terme. This village has a panoramic position on top of a rock. Only the tower from the Middle Ages has been preserved; the San Maurizio dates back to the Baroque period. Vineyards were already being planted here in Roman times, it is therefore not surprising that this village is proud of its great wines.

Acqui Terme is the next stop. This lively town has been known for its hot springs since Roman times. The center of Acqui Terme is the Piazza Italia where you can find the stately Grand Hotel Nuove Terme with its thermal complex. Corso Italia, the shopping street of the town, starts right opposite this hotel. On the right you soon find stairs leading to Via Cardinal Raimondi, with Palazzo Marenco and Palazzo Accusani. The heart of Acqui Terme is the Piazza della Bollente, with a fountain in which the famous 75 ° C spring water bubbles. So, pay attention to not burn yourself! You often see people with bottles and cups here. They drink this water because, according to many, it has healing properties. 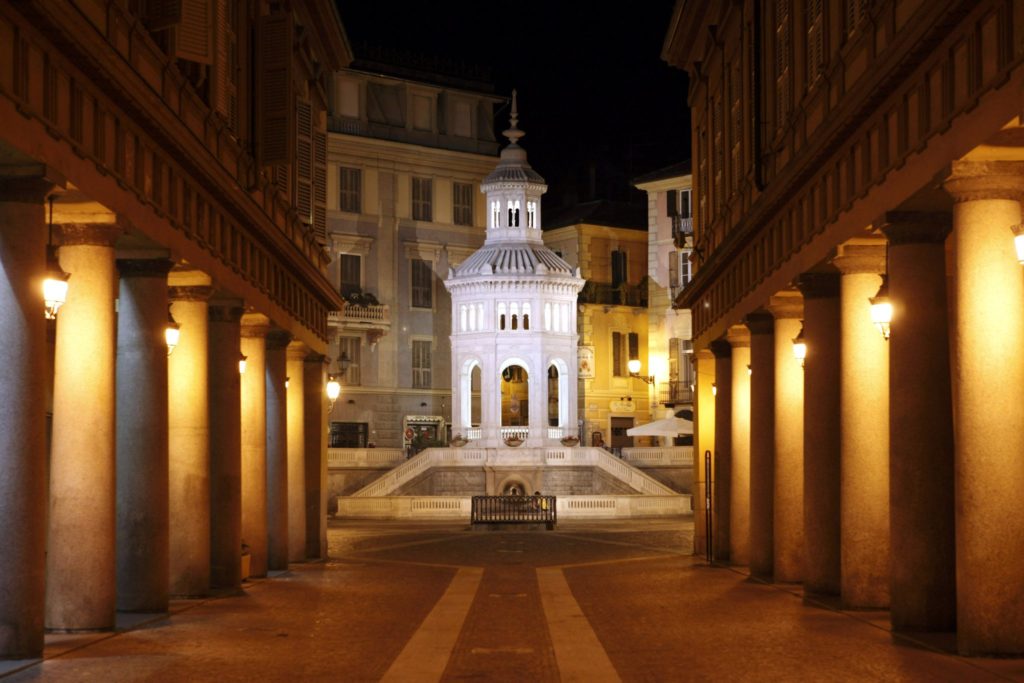 Depart Acqui Terme towards Melazzo and turn left towards Arzello, where you can admire the Romanesque church of San Secondo. Continue to Castelletto d’Erro. Along the way you will see the castle of Montecrescente. Unfortunately, it has been severely neglected. Castelletto d’Erro is beautifully situated in the hills that separate the Bormida and the Erro Valley. A few medieval houses have been preserved in the village. The next hamlet, Montechiaro Alto, consists of exactly one street and one church. At the top of the you can enjoy the view from the ruins of a castle. 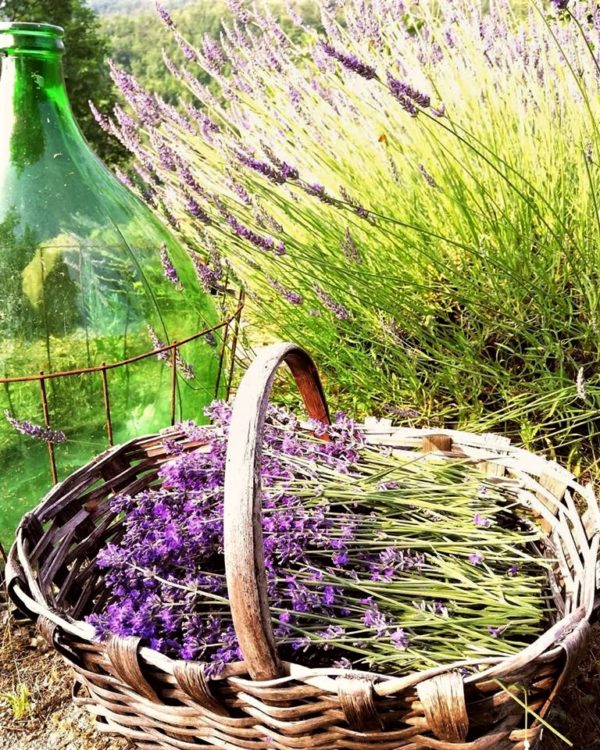 Now drive towards Turpino, a part of Spigno Monferrato. Here the prehistoric dunes, the calanche, stand out among the green hills. Continue towards Spigno until you see the Pareto exit to the left. This village is located on the border of Piedmont and Liguria and is built around the castle of Spinola, with a church next to it. From Pareto you drive to Merana where you can admire the medieval tower from afar. If you would like to visit the tower, you can come to Agriturismo Verdita for the key. We invite you to experience Piedmont off the beaten track and discover the medieval villages of the Monferrato Acquese! 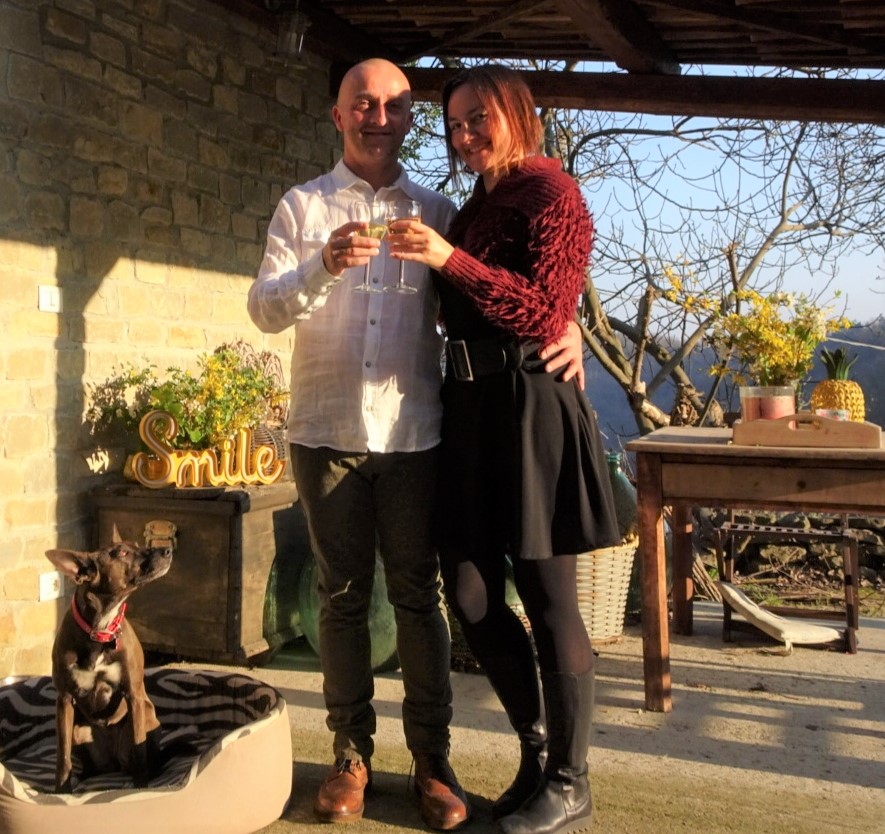 Piedmont Off the Beaten Track Guest Blog Post by: Natascha and Nicolas who live on the border of Piemonte and Liguria, where they run Agriturismo Verdita a lavender farm with self-catering apartments. 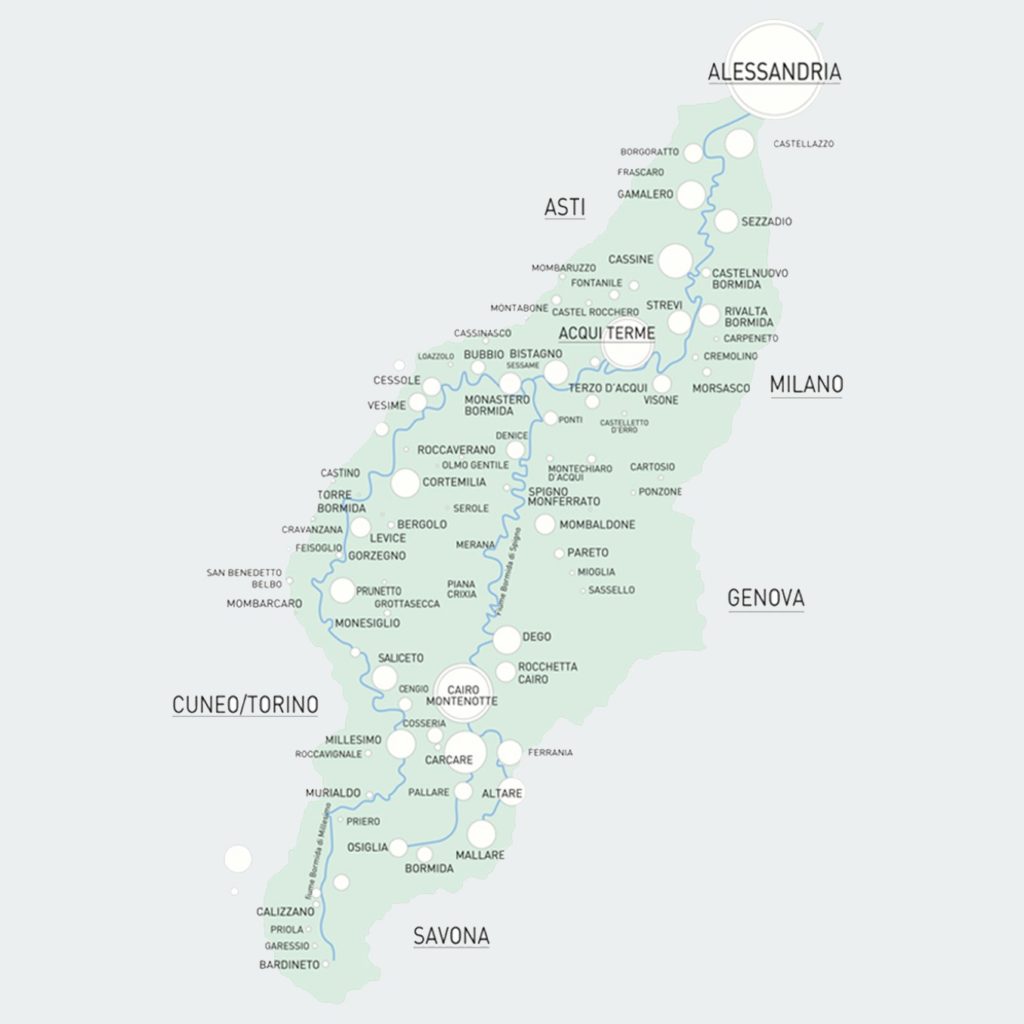