The Shroud of Turin: Fact or Fiction?…

One of the things Turin is known for is being the keeper of the Shroud. But is it real or is it a fake? That is the question! Many of the pilgrims and visitors who are coming to Turin to see the Shroud between the 19th April –  24th June strongly believe that it is the genuine imprint of Christ. Other more sceptical visitors are here because even they are curious. It might just be real after all. Or does it really matter?

The Shroud of Turin (La Sindone di Torino in Italian) is a piece of cloth with the faint imprint of a man on it. That man looks like the classic images we see of Christ. Even though I saw the Shroud of Turin in 2000 I was curious enough to want to see it again. For me it was also a question of occasion. It isn’t every day that you can see the Shroud! Between 1898 and 2000, the Shroud had been displayed just 5 times!!

The Shroud of Turin: inside the Duomo – compliments of Sindone

So, you never know when or if you will get another chance. I don’t think it matters if you believe in its authenticity or not. I still don’t know if I believe it. But when I was standing in front of it once again a couple of weeks ago I started to wonder…Is that really Christ’s imprint I’m looking at? It was a little overwhelming. You never really know…! It was great to be given the chance to have another look at this holy relic. The city of Turin has made this a wonderful experience for pilgrims and visitors.

From the reception point, the covered route I took from picturesque viale dei Partigiani (just off from Corso San Maurizio) winds up the hill towards Piazza Castello, through the Royal Gardens (Giardini Reali), past Palazzo Reale to a side door of the cathedral (Duomo).

Before getting to the Duomo di Torino (Turin’s Cathedral) we stopped for around 5 minutes to watch a video about the Shroud of Turin. The video is essential viewing and very interesting as it points out the various marks on the body. This makes your viewing of the original a more vivid experience as you will be much better informed. The information is translated into different languages.

The Shroud of Turin – compliments of Sindone

After seeing the Shroud I went to lunch with an Italian friend and she was saying how truly amazed and proud she is that so many people have come from all over the world. Turin city centre has probably not seen this many international tourists since 2006 when it hosted the Winter Olympic Games. In fact, over a million pilgrims and visitors are passing through.

Considering the huge numbers, I think that the organisation of this experience has been phenomenal. Coaches have their own designated parking area behind the Royal Gardens. Visits are scheduled every 15 minutes. Yes, there are crowds but it’s not overwhelming. Everything and everyone moves seamlessly along the route to create a peaceful and very pleasant visit.

Apart from the Shroud itself, the stars of the event are undoubtedly the volunteers who work painstakingly to make sure that everything runs smoothly. Facilities are well organised. There are plenty of toilets at various intervals along the covered route that prepares you to see the Shroud. Families with kids can breathe easily! Wheelchairs are also on hand if needed. It is quite a long walk to the Duomo (850 metres) from the reception area. Volunteers are always in sight so you can’t get lost or miss anything. They line the route up through the Royal Gardens (Giardini Reali) right to the door of the Duomo. 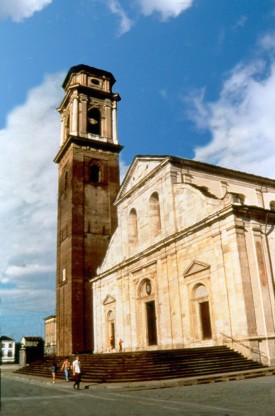 The only time I queued was when we were at the door of the cathedral waiting to go in. After about 5 minutes were ushered in. We then waited again for another 5 minutes just before the viewing ramps that have been erected near the altar.

Where is the Shroud of Turin Kept

The Duomo is dedicated to Turin’s patron saint, John the Baptist (The Cathedral of St. John the Baptist) and its Renaissance architecture dates from 1491. As Italian cathedrals go, it is small in comparison. I feel its smallness makes it more welcoming though. It’s a peaceful place where you can sit and be mindful or walk around and admire the side chapels that have been elaborately decorated by Turin’s most eminent families and guilds over the years.

The Shroud of Turin is displayed above the nave. If you get chance to see behind it, here lies the doorway to the Holy Shroud chapel (Cappella della Sacra Sindone) by Guarino Guarini. It’s disappointing to see from the outside that the chapel dome is still covered in scaffold. It has been like this since a fire in 1997. The Shroud used to be kept there. It was only just swept to safety in time before it would have been engulfed in flames and destroyed forever.

When the original Shroud of Turin isn’t on display, you can see copies of it in the Duomo and also in the Church of San Lorenzo (Chiesa di San Lorenzo). 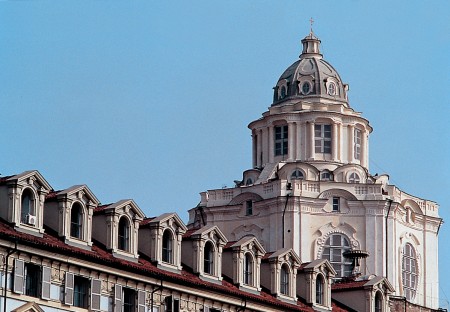 One of the highlights of the event will be when Pope Francis comes to Turin. Pope Francis will say a prayer in front of the Shroud when he visits Turin on 21st June. I’m sure it will be an amazing day. I saw Pope John Paul II when he visited in 2000. I was living in via Po at the time and we watched him and his entourage from our balcony. A really special memory.

For more information on the Shroud there is a gem of a museum just a 5 minute walk from the Duomo: Museo della Sindone in via San Domenico, 28.

When I first went I walked in thinking I would be in and out in about 30 minutes but ended up spending 2 hours poring over the exhibits! I was totally engrossed. My big tip though is to get the audio guide. With this you’ll really get the most out of your visit. It’s a fascinating story! And it makes you start to think about the Shroud of Turin. Is it real, or not…?

For bookings and more information www.sindone.org