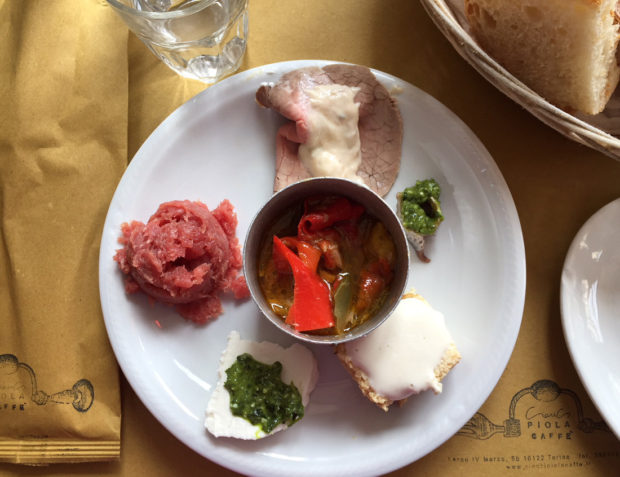 Turin is a paradise for foodies and the city boasts a huge range of places to eat. From simple trattorias, vegan eateries to Michelin-starred restaurants, there is a place to please even the pickiest traveller. There is no better way to explore the city’s gastronomic scene than by asking locals where to eat and what traditional dishes to sample. Here is our list of ten restaurants in Turin that locals love.

You will not hear the word “piola” (piole in plural) outside of Piedmont. It means a small and casual traditional eatery where inexpensive simple meals are served. In the old days, it was somewhat of a mix between a bar and osteria where locals came to have a glass of wine, have a simple meal, sing and gossip. Nowadays, piole are slowly disappearing giving way to modern sleek restaurants with more elaborate menus and wine lists. However, a few unrefined, real and honest piola eateries, often run by older generation locals, still survive in Turin.

Do not expect a menu in English or any menu at all. In many piole you will see a blackboard with the few dishes that are offered or you will be told by the waitor what is available on the day. Do not let that put you off, just ask for a starter (antipasto), pasta dish (primo) and/or main meat dish (secondo) and enjoy the hearty local fare. Make sure you have enough cash in your wallet, as many of them do not accept credit cards.

Entering Caffè Vini Emilio Ranzini, an unassuming family-run piola is like stepping back in time. Open since the 1950s, it serves cold meals. Ask for a tagliere, a mix of sliced local cheeses and cured meats, if you want to taste such delicacies as la mocetta, an artisan salami made using an ancient method from high in the Alps, artisan salsiccia cruda, blu di Lanzo and excellent gorgonzola cheeses. During the summer, you can sit in the tiny courtyard (if you are lucky to find space!). Be warned, it is packed with locals, professionals, students, artists and occasional tourists for lunch and dinner. 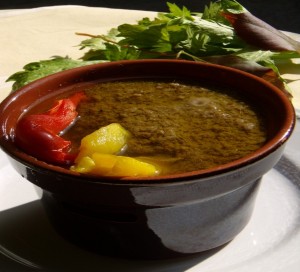 Located in what once was a workmen’s neighbourhood, Borgo San Paolo, this small piola has not changed for decades. The owner, energetic 80-something year-old Celso, greets clients and chats with some in a Piedmontese dialect.

Here you will find all traditional fare like: acciughe al verde (anchovies in a parsley sauce), old style vitello tonnato (thinly sliced veal topped with a creamy sauce made with tuna, capers, anchovies, meat broth and boiled egg yolks), peperoni con la bagna cauda (peppers with a rich dip made with butter, garlic, anchovies and olive, hazelnut or walnut oil; served in autumn and winter), bollito (different cuts of slow-cooked beef mixed with less noble bits such as tail and cotechino as well as pieces of boiled capon and pork) and agnolotti (pasta with a meat filling). 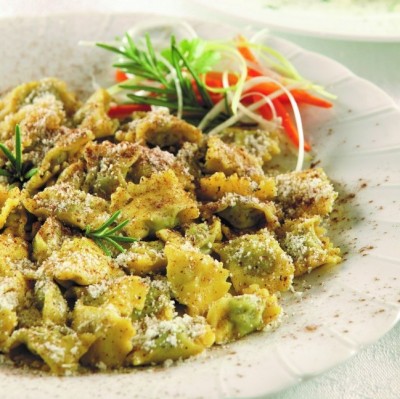 On weekends, it gets very busy and you might have to wait to be served. Book your table in advance for dinner on Thursday, Friday and Saturday. 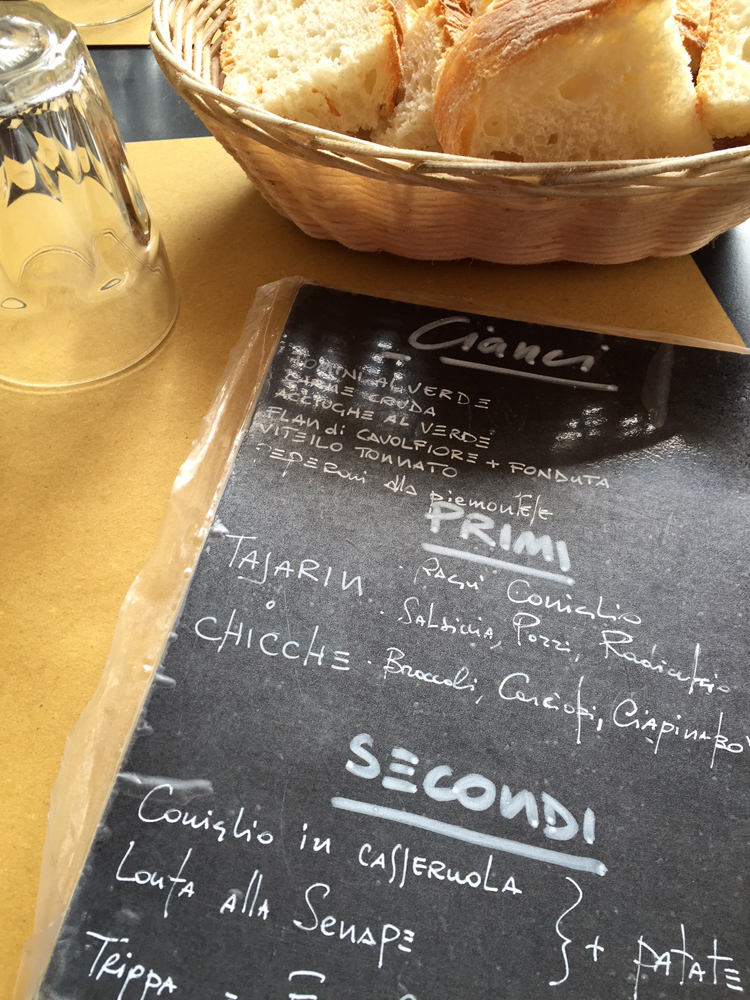 A few steps from Piazza Castello, this place has an unbeatable reputation for excellent food and good value. The short menu lists only a few dishes that change often and are always seasonal and delicious. Excellent carne cruda (a local version of the French steak tartare) and tomini (soft cheese often stored in oil) are served as appetisers. Order an antipasto misto if you want to taste different appetisers at once. 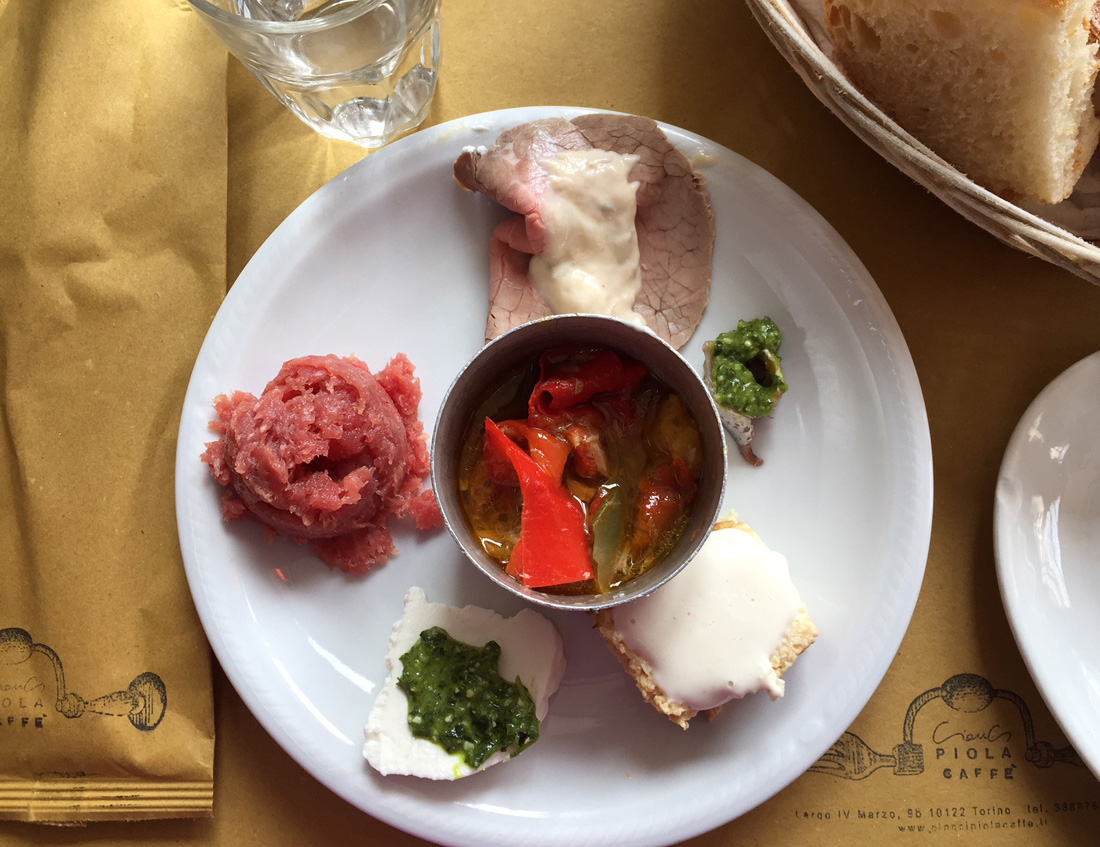 Da Cianci Piola has become so popular lately that getting a table for dinner is almost impossible (they rarely answer the phone but try calling at least a day in advance to book ahead). To avoid disappointment head there for lunch but make sure you arrive 10-15 minutes before  opening time. You can admire the pretty square where the piola is located while waiting.

A small eatery with a warm friendly atmosphere. On the menu are simple regional and Italian dishes with a modern twist and local ingredients. Make sure to sample typical Piedmont starters, the bread made fresh on the premises, homemade liqueurs and their delicious il bonet dessert. 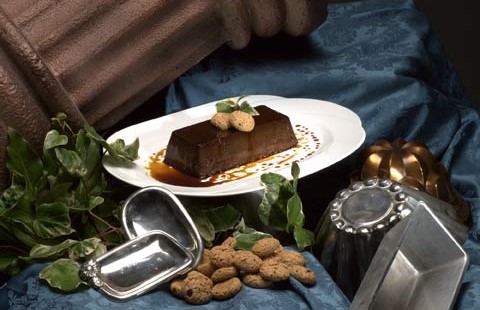 Il Camaleonte Piola can get busy at dinnertime, especially on weekends, so make sure you book in advance or have a backup plan if you can’t get a table. 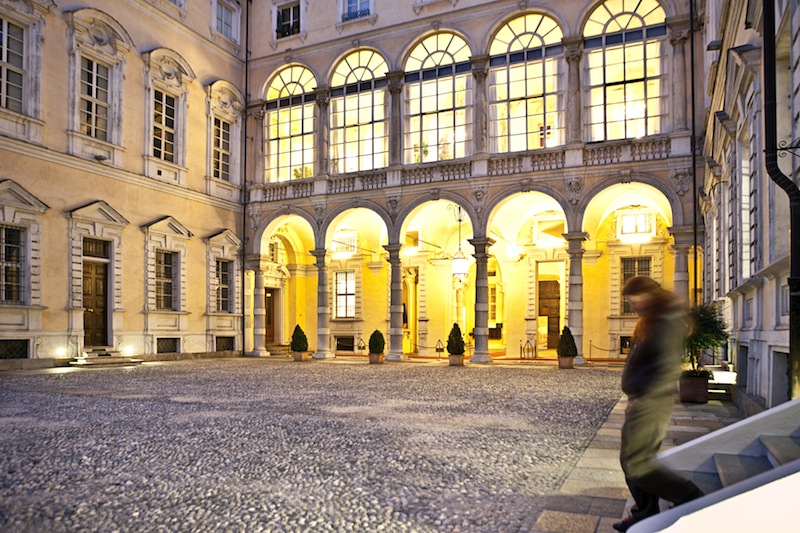 Circolo dei Lettori may not be a traditional restaurant but it is worth including on this list because it’s truly a hidden gem. The café (called Barney’s but many locals refer to it as Circolo dei Lettori) is located in a magnificent 17th century, Palazzo Graneri della Roccia. It is a public space entirely dedicated to reading and a meeting space, which is supported by the Regional Department for Culture. Do not be intimidated by the grand opulent rooms, the atmosphere is warm, the staff is friendly and there is always someone at hand who speaks English.

Circolo dei Lettori is one of the best places to have brunch, which is served buffet style and costs €20. They also offer an Aperitivo Monday through Friday starting at 6.30 pm, where you get a drink and can snack on a buffet of appetizers for €10. For a full meal, there is also a restaurant that offers excellent regional dishes for lunch and dinner.

For more about Circolo dei Lettori

Located in a residential area near the historic antique market Balon, this family-run trattoria is a hit with locals. The décor has not changed much since the 1970s and the menu is only in Italian but, whatever you pick, you are guaranteed to get great homemade regional food. The owner, Walter, can come across as cranky and smokes inside sometimes but locals love the place for its old-fashioned atmosphere. In the evening, there is often traditional live music with the owner and customers singing along.

For more than 50 years, this simple trattoria has been offering excellent regional dishes. Like in any traditional trattoria, stick to local dishes and you won’t be disappointed: finanziera (a stew made with cocks’ crests, chicken liver, calf brain and sweetbreads, all slowly cooked with Marsala or red wine, a small amount of vinegar and thickened with a pinch of flour), tajarin pasta (a local thin square shaped spaghetti), cervella fritta (yes, calf’s brain fried in butter!), bollito misto (slowly cooked beef mixed with less noble bits such as tail and cotechino as well as pieces of boiled capon and pork), brasato (beef braised in Barolo wine).

They also make good fritto misto but it has to be ordered at least two days in advance. It is served in three courses: fried vegetables, then meat and, to conclude, fried fruit and other sweet bits that, all combined, make a glorious hearty dish. Friendly energetic waiters speak some English. 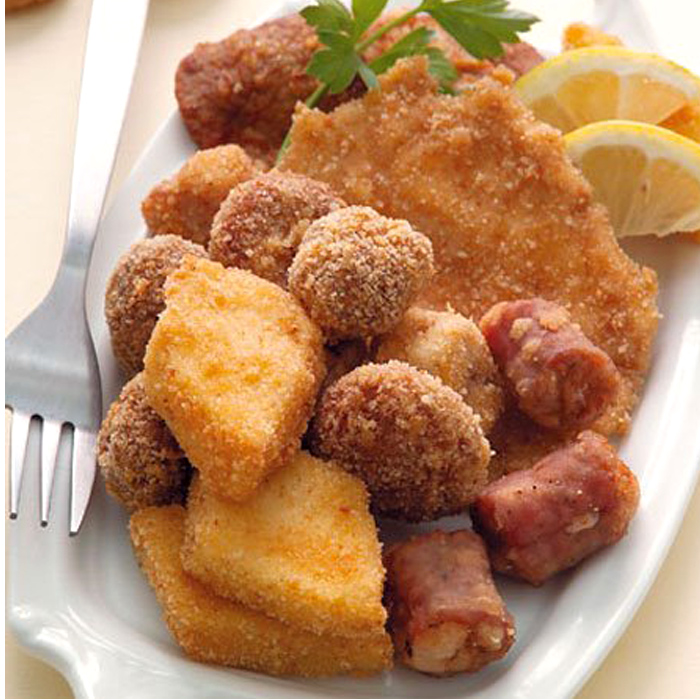 This family-run restaurant serves typical dishes from the Langhe area of Piedmont. The décor makes you think more of an Italian nonna’s sitting room than a trattoria. The dishes are simple, just like in older times. Try the tagliolini alla bagna cauda pasta, agnolotti and carbonata meat stew for an extra-hearty traditional meal. Call to book a table on weekends. 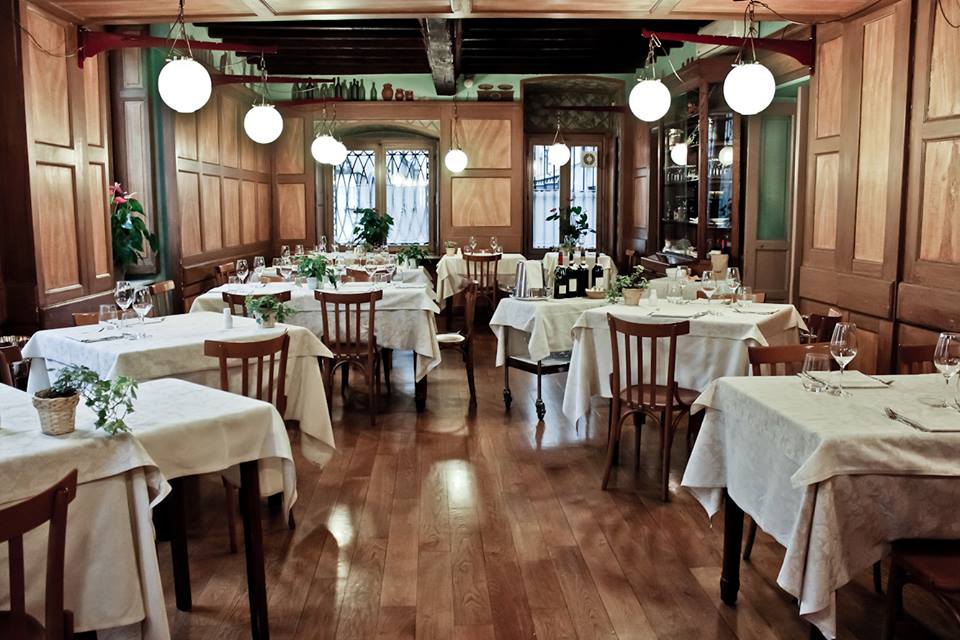 This small and traditional restaurant is renowned for their legendary agnolotti ai tre arrosti (made with three different types of meat, just like in the old days) and bollito misto. The bollito is sliced in front of you on a trolley and served with a range of delicious sauces. Try their tasting menu (Menù degustazione) for €50 to enjoy such typical local dishes as vitello tonnato, carne cruda, insalata russa, agnolotti torinesi al sugo d’arrosto and bunet in one sitting. 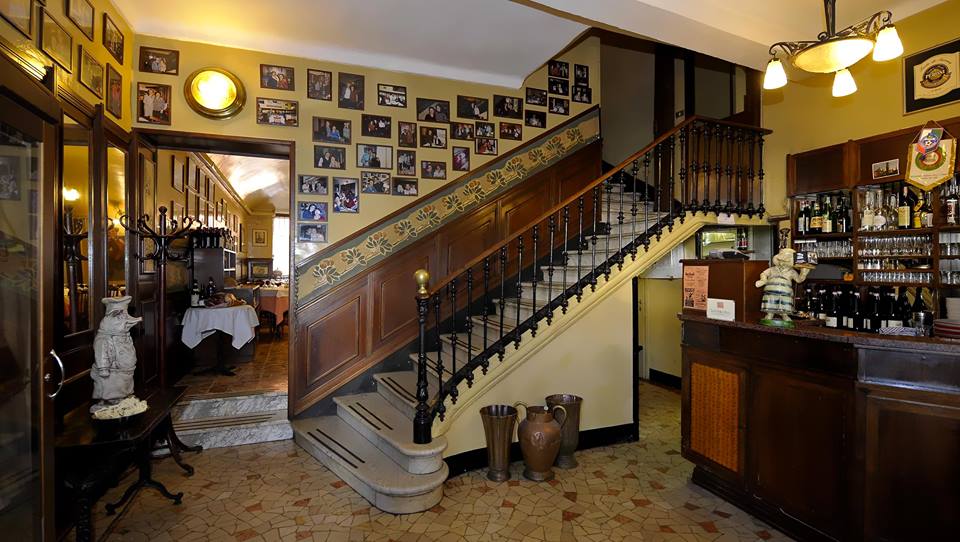 The restaurant has been serving typical local dishes since 1863 when horse carriages parted for the port of Savona from its front door. The 19th century tavern-style décor is combined with traditional hearty dishes of Piemonte. During warmer months, you can enjoy eating al fresco in the majestic Piazza Vittorio Veneto.

Check out the menu of the day for seasonal dishes. Go for their degustation menu (Menù degustazione) if you want to try a range of typical regional dishes..

This list of local eateries in Turin is by no means exhaustive…there are so many delicious places to eat from casual to elegant. This list will help you discover some of the traditional restaurants to eat in Turin to begin your gastronomic journey.

Anna Lebedeva is a freelance food & travel writer based in Italy. She has written a culinary guide, Eat Like a Local in Turin, where you will find 90 addresses of restaurants, bars, cafes, bakeries, chocolatiers, food and ice cream shops and markets that locals love, learn about 30 traditional dishes and foods, many of which can only be found in Turin, and get a glimpse of the city that normally remains hidden from tourists.

Top 10 Cafes and Bars in Turin