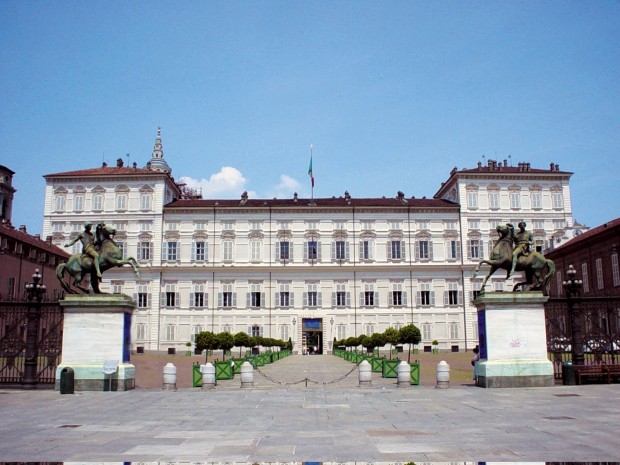 It isn’t quite so well known that Turin was one of the stopover points for wealthy Brits and other Northern Europeans on the Grand Tour circuit 1660-1840. In search of arts and culture, and rubbing shoulders with aristocracy and polite society along the way, young tourists would make their way to Italy from France. Venice, Florence and Rome were their final destinations with Turin their first grand entrance to embarking on a romantic rite of passage of discovery of the country’s Renaissance and Baroque treasures…including Turin’s royal palaces and museums. 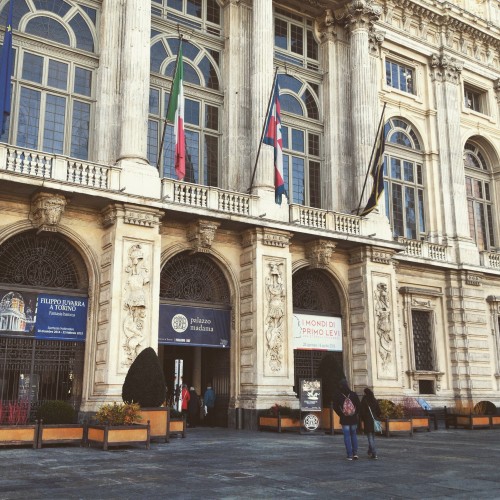 Palazzo Madama in the heart of the city’s historical district was one of the Savoy’s royal palaces that caught their imagination. Official residence of Marie Christine of France and her friends, the Madama Reale (royal lady) chose it as her favourite at the beginning of the 17th century. Later Marie Jeanne Battiste de Nemours added some striking touches with the help of one of the Savoy’s best-loved architects Filippo Juvarra. The most impressive section being the ornamental façade which turned a fairly plain looking medieval castle into a grand palace fit for the 18th century. A man of the church and with a history as a stage set designer, Juvarra’s architectural works were always theatrical and a signature of his style. 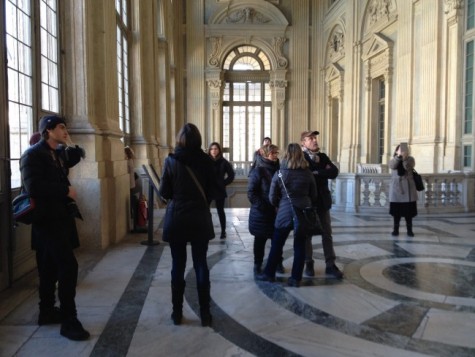 Inside the façade, at Palazzo Madama you can sweep up Juvarra’s majestic staircase to admire the stuccoed ceiling on the landing (reminiscent of a small stage) where each flower you see was delicately crafted to be slightly different. You can also admire the esoteric images of a woman holding a circle and a snake and a man with an angel, together representing longevity, eternity and fame. As you walk down the stairs, you can appreciate the fact that the steps were made to be this shallow so that the women of the day could climb and descend them easily with their big dresses.

Grand tour culture vultures would also have been wowed by Palazzo Reale a short walk away across Piazza Castello and now part of the Polo Reale royal museum complex. However, it is interesting to note that this started out life as a Bishop’s palace in the 15th and 16th century. The Savoy’s snaffled it later since it was the most impressive building in the city even without the additions that came later as each king and architect added wings and embellishments in their own distinctive taste and style. 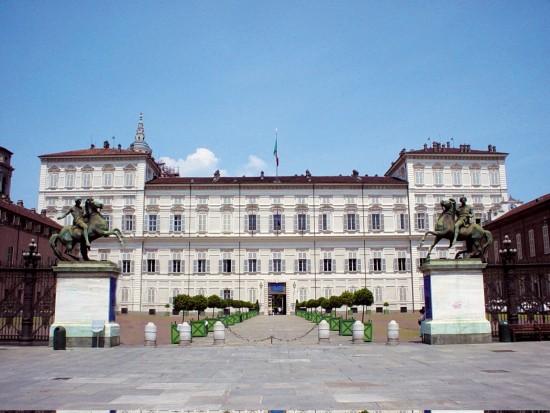 The west gallery housed one of the world’s most famous religious relics – the Turin Shroud (La Sindone) which will once again be on display from April 19th to June 24th 2015. However, you won’t find it in the west gallery but you will be able to see it inside the Duomo in nearby Piazza del Duomo. Historically, and perhaps rather unbelievably given its significance, the Shroud was first exhibited from a wooden building at the gates of Palazzo Reale that face onto Piazza Castello. The only reason the Shroud got to be displayed elsewhere was because the wooden building was later destroyed in a fire. Unfortunately, the Shroud does have a habit of being endangered by fire every once in a while, with the last incident being in 1997 when Christ’s said imprint was dramatically saved from flames that engulfed the chapel at the rear of the Duomo.

Within Palazzo Reale itself, the east gallery was traditionally taken as the King’s quarters but royal protocol got turned on its head with the reign of King Carlo Alberto who in 1831 decided he wanted an apartment facing south over the gardens…and the sun. A more appealing view and warmth were his concerns according to official interpretations. 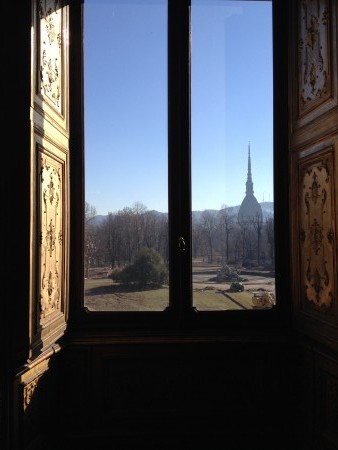 Some say, though, that since he wasn’t as popular as his Queen at that time it was a spiteful move that meant that she would be banished to the back of the building and further away from her admirers. It was undoubtedly a curious choice for a king, especially since Carlo Alberto moved into a bedroom that was a significant downshift in terms of both size and its modest furnishings. In those respects, at least, the queen won some considerable concessions. 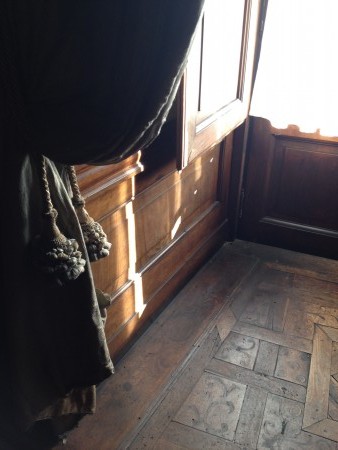 The Armeria Reale and Biblioteca Reale

Nevertheless, King Carlo Alberto was a man who genuinely appreciated the finer things in life and was a passionate advocate of the arts. He amassed an impressive collection of Italian and Northern European masters that you can see in the new Galleria Sabauda. He was an avid collector of paintings but also of coins and armoury. He introduced museums to Turin and opened the Armeria Reale (Royal Armoury) and the Biblioteca Reale (Royal Library) to publicly display his private collection of books, manuscripts, maps and arms.

The Armeria Reale opened its doors in 1837. You will be amazed at this fabulous collection of treasure. Even if you are not a huge fan of armoury, you will love this. Take particular note that as you walk across the black and white chequered flooring you are actually stepping on the original from the Galleria di Diana at Venaria Reale (on the UNESCO Heritage list since 1997). The floor that you see in Venaria Reale is a replica from Napoleonic times at the beginning of the 1800s. Still a historical piece in its own right but not the original tiles. 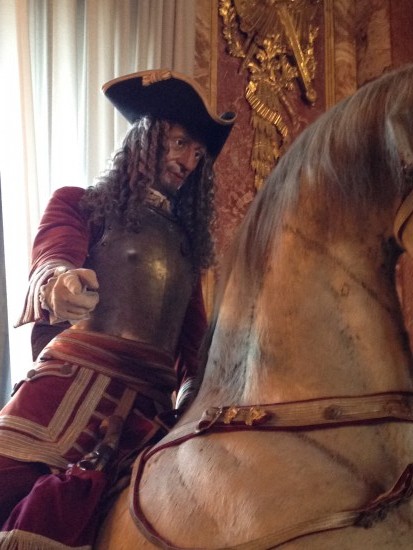 One of the most breath-taking sights at the armoury are the rows of battle horses complete with armour clad royals. See if you can spot Prince Eugenio’s bullet dented armour at the end of the corridor (if you enter from Palazzo Reale) on the right. Some of the older armour weighs around 30 kilos, which must have been a battle in itself to move at all! You’ll need to look closely, but also check out Emanuele Filiberto’s armour in the middle of the row on the right side. A whizz at military strategy and nicknamed ‘Iron Head’ in honour of his skills in battle, his armour is intricately engraved and must have weighed a ton. But as well as being a hard-nosed battle strategist he was also a romantic at heart as you can see from the romantic insignia of wedding bands and entwined hands to represent his union of matrimony to Margherita di Valois who at 5 years his senior at 36 was a controversial choice of bride in more ways than one. Concern that she would not produce an heir at such a ripe age was allayed however when she produced a son (phew!) after just one year of matrimony – a son who would later become Carlo Emanuele I.

One of the highlights of the museum though has to be Carlo Alberto’s horse. Affectionately given the name ‘Favorità’, the horse is the only one that is the actual original! The others certainly look real but under their real skins, they are in fact, wooden. Carlo’s horse is the real deal. He didn’t have to trot too far over either as the Biblioteca Reale next door previously housed the royal stables. 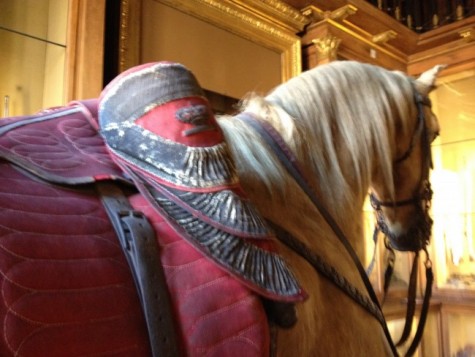 The Grand Tour tourists of that age were amazed at what they saw on their Turin stopovers and you will be too. We bet though, that you will choose to spend a bit longer than they did even if you are on your way to Venice, Florence and Rome.

Visit http://www.torinoincontraberlino.it for info about Berlin inspired events in Turin throughout 2015.

The German Blogger Tour was organised by Turismo Torino in collaboration with Incoming Experience. Many thanks to Chiara Crovella and Silvia Cordero. A special mention also to Sabine Cikic, Soraya Nuri, Nico Lai, Caroline Weinkopf, Sabine Neddermeyer & Britta Smyrak. Our fellow bloggers – See you in Berlin!