from the Tanaro Valley of Cuneo

Considering the importance that polenta holds in Italian culture you feel that its main ingredient of maize or corn must have been here forever – but of course the plant isn’t native to Europe, corn as we know it was introduced from the Americas after Christopher Columbus.

Maize here in Italy is called ‘granoturco’ with the apparent reasoning that Persia, once under Turkish rule, was very possibly the first country to cultivate large quantities of maize in their valley plains…..and therefore the term ‘granoturco’ or ‘Turkish grain’ would make sense. 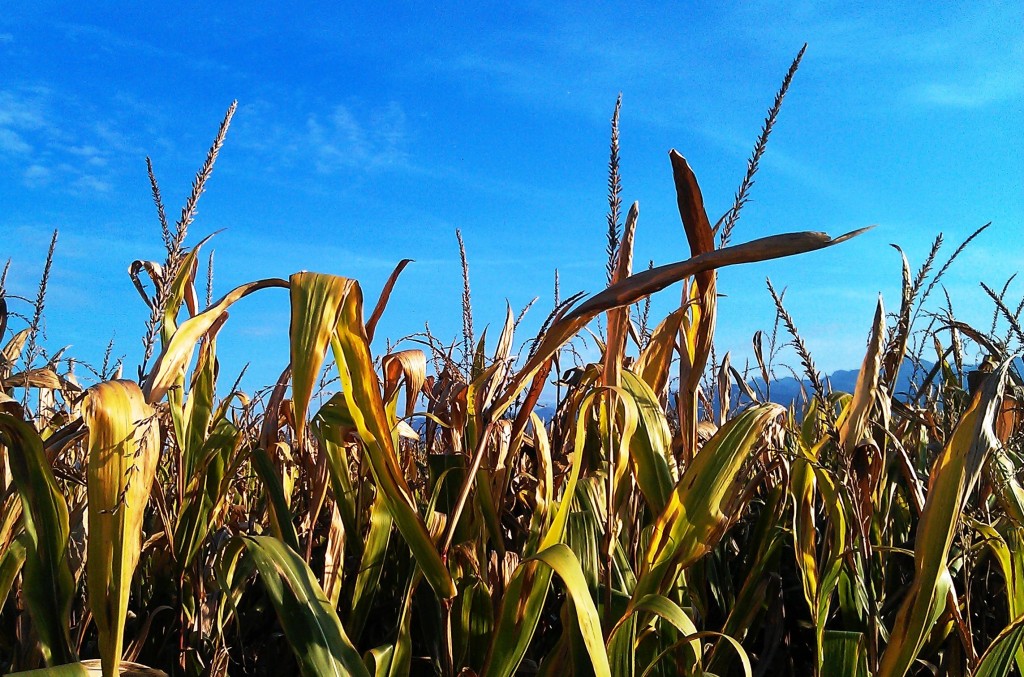 According to Italian records maize arrived in the Lombardy region of Italy in the early 16th century and, from there, came on down to Piemonte some years later in about the mid 1500s. However it wasn’t until the 17th century that maize-growing really became well established in countries around the Mediterranean. 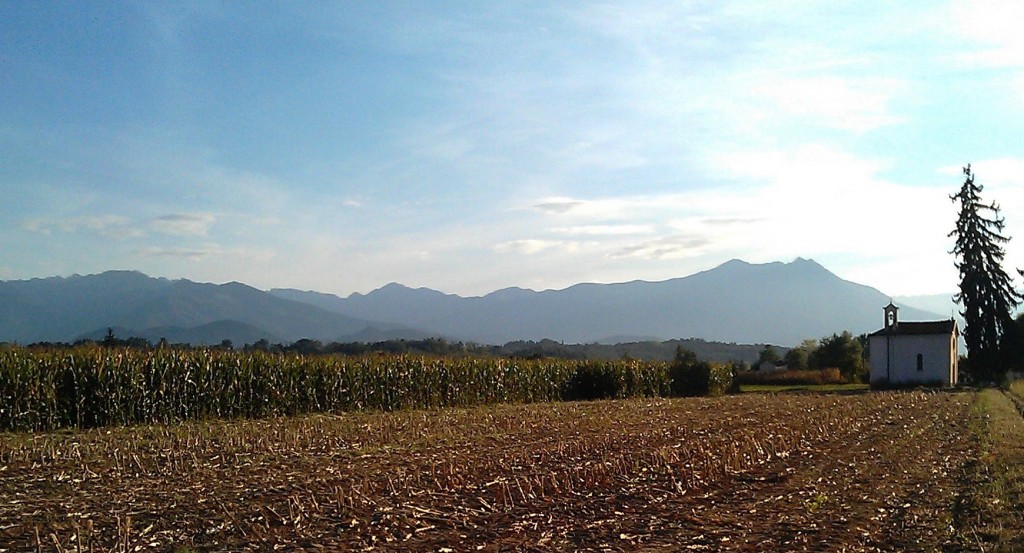 Cornfields in the Cuneo valley

To see corn growing in the Tanaro valley of Cuneo, then picked and dried in these old-fashioned wired frames or hung from wooden poles on stone barns in the villages of the Alta Langa gave me back a sense of the ancient history behind maize cultivation. 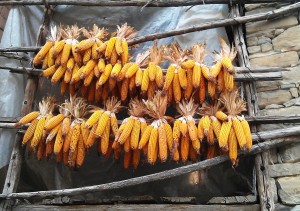 Corn hanging to dry outside in Igliano 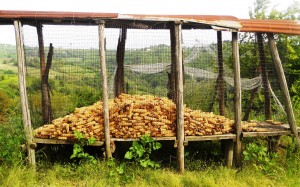 A sense of that time ten thousand years ago when the first farmers in Mexico started growing maize – when the Aztecs, Incas and Mayans ground, baked, wrapped and roasted their corn. A time when maize was not only a vital food for the Mesoamerican people but part of their very identity.

Now corn is a major global product with an equally major industry surrounding its production and I’d lost sight of the actual corn itself….it had become drowned in a homogeneous sea of corn oils and corn sugars that form part of the manufacturing process. With just the simple sight of yellow corn cobs or ‘pannocchie’ being harvested and dried in the fields and villages of Piemonte brought it all back.

To pay homage to maize’s Mesoamerican origins I have used corn husks in the way ancient Mayans used them to make their tamales for festivals – wrapped around a corn filling and baked or steamed. 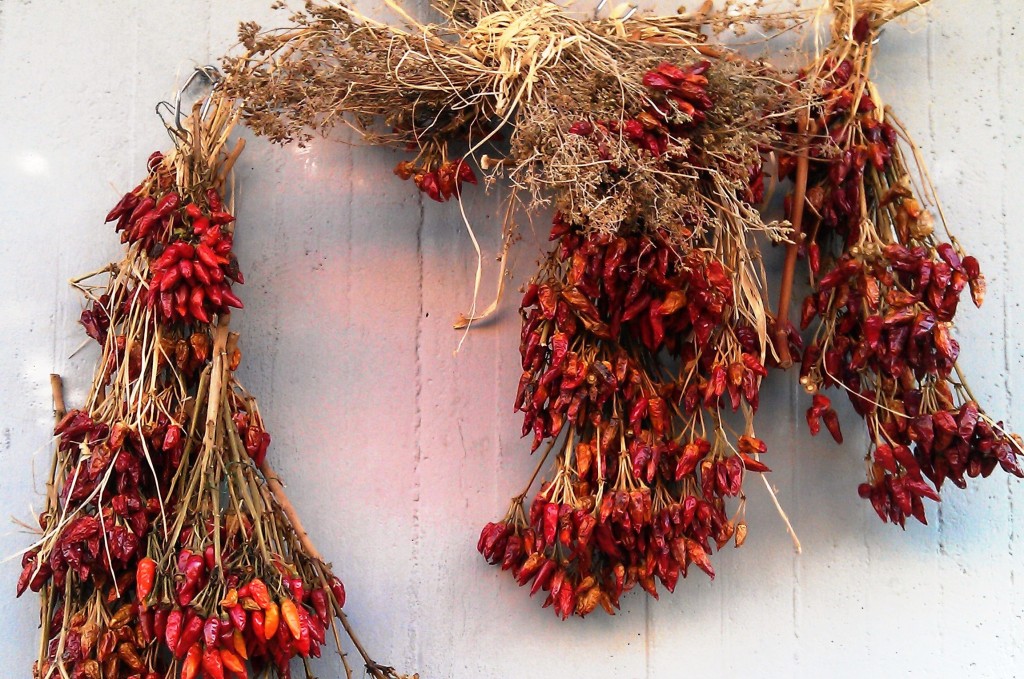 For extra flavour I’ve also added some chilli flakes and cumin seeds. Actually I didn’t think cumin seeds were part of the Italian spice drawer but, apparently, cumin calms the digestion and even Pliny recommended eating cumin seeds with bread and wine…..and who am I to argue with Pliny, the famous Roman author and expert on the natural world?!

You don’t eat the corn husks – and of course you don’t have to use any husks, you can just follow the recipe below.

But why not just ask a local farmer in Piemonte for some dried corn husks or buy fresh corn on the cob and dry your own : http://www.ehow.com/how_5607100_dry-corn-husks-tameles.html

Take 10 or 12 dried husks (depending how large they are)

Rinse them first in warm water to soften.

Pat them dry and flatten them out a bit.

*it can be hard to find baking powder in Italy so you can just leave it out – the cornbread will be slightly flatter but still good!

Put all the dry ingredients into a bowl – flours, cornmeal, salt, cumin seeds and chillies.

Take another bowl and mix all the liquid ingredients – eggs, milk, yoghurt, butter and oil.

Pour the egg mixture into the flour mixture and stir together – it will look slightly lumpy but don’t worry!

Spoon the mixture into the greased loaf tin and bake for 30-35 minutes (I baked mine for 35 minutes).

Take out and leave to cool on a wire rack.

Cornbread goes well with practically any meal – stews, roasts, vegetables, salads, pates, cheeses, salamis….in fact any ingredient that goes with polenta you could use with cornbread.

A great idea for this time of year in Piemonte – I’m talking truffle-time of course! – would be to have a little bowl of truffle oil to dip slices of cornbread in…..or lightly mash up some butter (or soft cheese) with a few drops of truffle oil and spread that on….or if you have a fresh truffle, grate a few slices over!

Faustina is English and now lives in Italy. Faustina moved to Italy to be with her partner, Fiorenzo, and they have a Feldenkrais, Floating and Food Therapy Centre: www.spaziof.org . She continues her love of food and research by exploring all the wonderful places and products here in Northern Italy; She is a member of Slow Food Italia and teaches seminars on healthy eating and juicing, as well as writing her food/health blog www.eatingcloudsinitaly.com